Oof, this day had me down, but only for the morning…

I have this… I wouldn’t call it a “condition,” but a trademark. If I have something for which I strive to wake up, then I can get up quite easily, usually with the first notes of my alarm. But if I’m desperately tired or unmotivated to go to the task or job I have to accomplish, then my mind instinctively find ways to convince myself to go back to sleep.

Often, these methods are me simply convincing myself that I can snooze the alarm a few times– or what’s worse, convincing me that the alarm is part of my dream of which I’m supposed to ignore. I used to be late to work at Eastern Maine Medical Center or Verizon because of these events. But I found my argument strong today when I had to alter my sleep schedule to work overnight on 9-1-1 (hence this post being a day late).

I woke up at 11:30 AM, and made myself breakfast before screwing off for a few hours, down on myself because I woke up so late. “Present Jamie” always loves falling back asleep, while “Future Jamie” laments the lost hours of life.

That’s enough about my bad habits, let’s get on with the meals, shall we?

For breakfast, I made– you guessed it: two fried eggs, bacon, grilled onions & jalapeños, hazelnuts, and a banana with the old classic: Tim Horton’s Coffee. 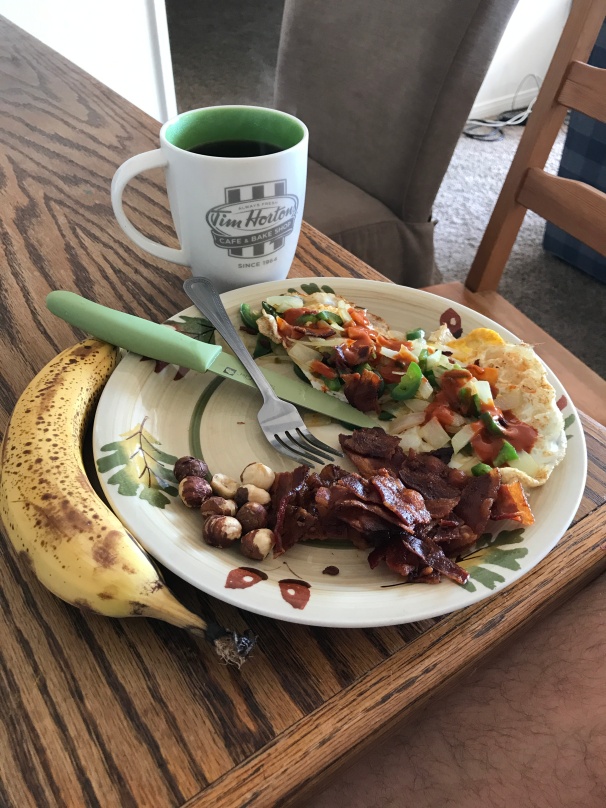 Then for lunch, – even though it was a few hours later (hey, you need your energy when working on set all day) – I had my carb-free meal from Catering. Our “breakfasts” when served at a later call like our 4 PM always consist of cheeseburgers, french fries, and the like. Mine was only a deconstructed hamburger (patty with mustard & grilled onions, tomato, lettuce, and onion), watermelon, and water. 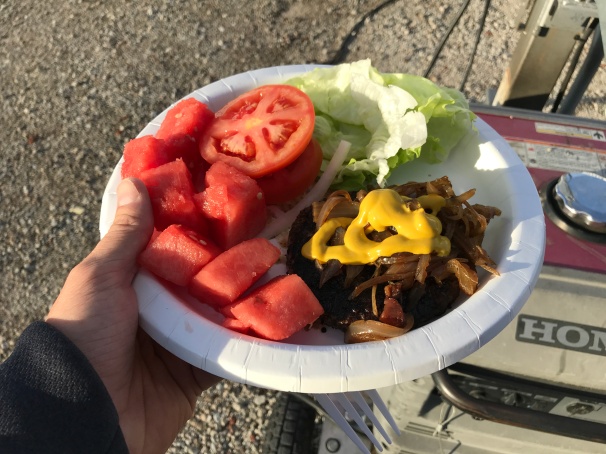 Then MUCH later (six hours after call as per usual), we had our lunch. Actually, we took a penalty; thus we ate at 11 PM. I snagged some fresh turkey before I got to lunch because I was hungry. It’s weird letting myself get hungry again rather than graze the junk at crafty.

For lunch, though, I had some delicious food from our caterers, Limelight Catering, like their beef tenderloin, chicken breasts, vegetable medley, tomato and lettuce with a light vinaigrette, honeydew, and watermelon.

And it was filling.

The temperature dropped to a balmy* forty-five degrees requiring me to consume two chamomile teas and a coffee over the night.

The final snacks of the shoot day were a banana and a small bowl of carrot and celery sticks, and cherry tomatoes.

So that’s my Thursday, NEW Day two!! I was severely tempted by the craft service table today, and I feared that I would slip. But then, I remembered how GREAT I’ve been feeling and knew that the junk would only compromise that energy and mental clarity. And who wants that?!

I’ll see you in tomorrow’s post (which I’m writing immediately after this one, because, delays).

*Yes, I know what balmy means, but you have to remember that I’m from Maine and I ain’t afraid of no cold. Cue the music!