Oh shit, I woke up too late.

I first got up at 8:30 to move my car that blocked my tandem parked-roommate, and I fell back asleep. I regained consciousness at noon but fell back asleep again until 1 PM. Now, I only had an hour before I drove the long trip to Long Beach. Since I didn’t have the time to make my usual breakfast, I reheated some of my sloppy joes for the weirdest breakfast yet:

I drove over to work, but as the traffic intensified, I realized that I would be a few minutes late for work. I still can’t get over how long it can take to travel forty-one miles. This time, it took a total of one hour and thirty-six minutes. Insane.

The overnight shoot began on a closed stretch of highway. Luckily, the craft services team had some healthy options for me: an assortment of berries and a grilled chicken kebab. I ate both happily while everyone else ate the first snack: Popeye’s Chicken…

It’s not that I wanted the fried chicken, but the mashed potatoes and mac & cheese called me by my name. It wanted to be inside me. 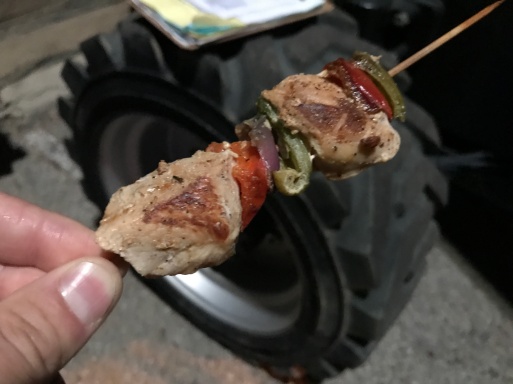 For lunch, I loaded up on steak and pork as the crew watched the episode of 9-1-1 that took us a month to shoot, Episode 104. The director’s assistant had set it up to play in the Lunchbox.

As the long day progressed, I found that the amount of meat I consumed at lunch gave me massive heartburn. In fact, it was the first time I had any sort of heartburn in months.

All I had for the rest of the night was a single coffee.

When I got home – and after being stuck in an hour of traffic – I parked my car in the garage at 7:30 AM. I knew I had to move my car in another hour for my roommate, so I just fell asleep in the car. He tapped on my window when he was ready to leave and I backed up and then back in the spot and fell back asleep. The last time I did this, I actually went back upstairs to sleep, but I woke up so late that time, that I didn’t want to repeat it again today.

So when I awoke at 11:30 AM, I just stayed up all day. And we’ll talk more about this day tomorrow!