So today, I came across many revelations while reading the Whole30 book that made me realize that I have to reset my Whole30 food experiment. Find out what I did…

Today started differently than any other day: I woke up, made coffee, grabbed a banana and the rest of my dried blueberries, and went driving for Lyft.

I needed to earn money to pay bills, and I definitely cannot afford too many more trips to the grocery store. I only made around thirty bucks, but it was thirty more dollars than I had before.

When I got home, I was ready to eat a proper meal. HERE is where I had my usual: two fried eggs, bacon, and homefries, with my requisite Tim Horton’s Coffee. Nothing out of the ordinary here. I opened the Whole30 book to research which recipes I would try today, and much to my dismay, I discovered a couple of errors on my part. 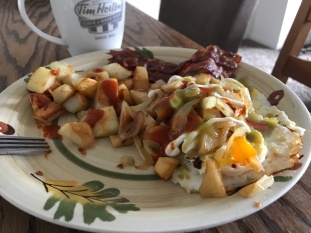 I had previously read that mayo was okay while perusing an ingredient list of a potential dish and had read that as “mayo’s completely okay for the Whole30 program.” Unfortunately, it only is IF you make it yourself. The second issue I uncovered was that I had been eating normal bacon, unaware of any of it being cured with sugar. Ugh. I had no clue, to be frank.

If these weren’t enough, I also felt utterly terrible after my dinner this evening, the leftover homefries and ground beef & green beans. I didn’t know why I felt so terribly, but it was the same inflammation in my sinuses that first made me dizzy three years ago when I first began to feel like shit. Maybe it was the potato or the tomato? Maybe I should avoid Nightshade* as it may be an inflammatory-causing agent to me? I find that hard to believe as they hadn’t affected me each and every time I ate them since I began the program. To be honest, I haven’t felt this good in a while… until tonight.

Then, if that weren’t enough, I didn’t read the bit where you shouldn’t try to DRINK the fruit juices, but only use them as sweeteners. In the end, there were too many conflicts (one is too many) for me to truthfully continue my journey and share it here with you, so tomorrow, January 9th, will be my first day once more.

At any rate, let’s finish the daily intake list.

After my breakfast, I had a carrot as I walked in the rain (THE RAIN! Oh, how I’ve missed you!) to get a cup of coffee at Groundwork and write yet another chapter of My Cancer Story.

I walked to work to get the (proper) ingredients to make my own mayo and clarified butter for entree cooking. By the time I got home, I wasn’t feeling making any dishes, so I just ate the aforementioned leftovers with a tomato, and felt like crap. I went to the gym – which always makes me feel better – then I made my mayo and butter.

Then as I was mixing my mayo, I read a part that I thought I had read carefully before where it said to NOT use extra virgin olive oil as its taste is too strong. GREAT. That’s the only kind I had and I JUST got back from the store.

I tried to make the best of it (with a whisk; it was all I had) and had to add some more salt, paprika, and some mustard to cut the pungent taste down. I will NOT waste it because I cannot afford to. I’ll use it every damn day as a reminder that I need to read things CAREFULLY and double-check before I go out and buy some sugar-cured bacon. Dammit.

Well, screw it. I broke enough rules, what’s one more? I weighed myself. They say that the body fluctuates ~two pounds during the day, but I have already lost five pounds. Sure, that could be water weight, but man, that’s cool.

Okay, reset time! Here’s to tomorrow and a new month!

*Nightshade refers to the plants under the order Solanales, such as tomatoes, potatoes, peppers, and eggplants.