Another slow day off means another day of food freedom!

Is it weird of me to actually miss my fried eggs? After driving some early morning Lyft, I rectified that longing by making two fried eggs with grilled onions and jalapeños with potatoes. 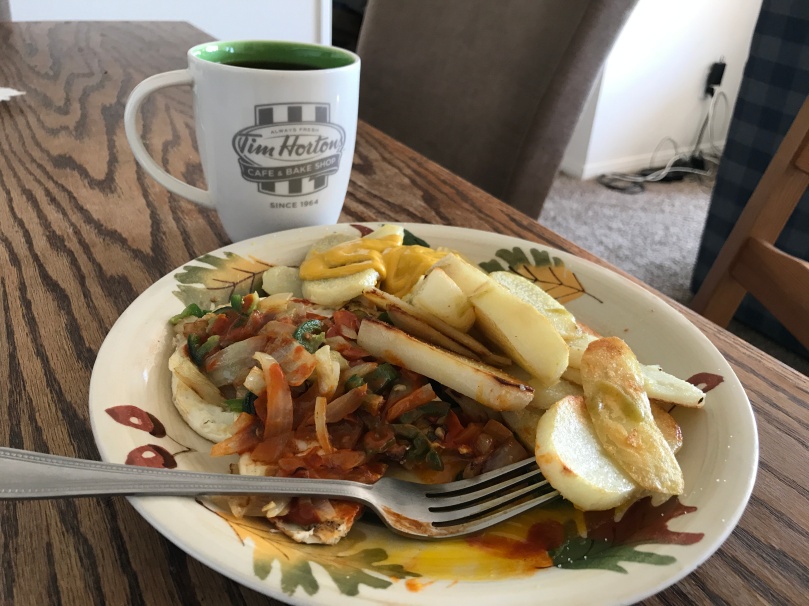 After breakfast, I went to the gym and walked to Groundwork Coffee to get some much-needed writing done.

About an hour later, I received a call from my co-worker that my check was available. I hopped in my car, threw on destination mode for Lyft, and made my way to the Mid-Wilshire area.

It was about then that I began to get that old familiar feeling. I still can’t determine what causes it, but I get pressure behind my eyes, sometimes in the form of a twitch, then my brain gets foggy, and it feels like I’m drunk, not fully in control of my body. I had hoped that this diet would be helping prevent such a thing, but it’s still not going away. Maybe I need to do the Whole30 longer. Or maybe it’s something out of my control.

When I got home, I debated going to watch a movie at the theaters, but I opted to instead write some more. Yay for progress! I ate first and had my old “classic” Whole30 Sloppy Joes, and some more of that leftover salad mix.

I rounded out the day with some pickles and goji berries. Wait, am I pregnant?! And I finally got around to watching the Maine film, Bluebird. This was a pretty damn good dramatic film about a boy who falls into a coma on a school bus in the dead of winter in Millinocket and the fallout surrounding the bus driver who missed him on her end-of-day check.