Ok, I’ve had enough rest. Edmond, OK was great, but I need to make up for some lost ground. I got up, went downstairs for breakfast, and began writing Day 8.

That was good food. I then went upstairs, finished the chapter, showered, then checked out.

The road from Oklahoma was a long one, and I mean long. Remember, I was originally going to stay in Amarillo instead of Edmond.

So I set out for my next goal: Red Mesa, AZ. It was a small town in Northern Arizona, that admittedly, was out of the way, but I wanted to try to see something other than what I saw from inside my car. So I was going to go to the Four Corners Monument, the place where Utah, Colorado, Arizona, and New Mexico intersect. I looked for a nearby Marriott, but I should have known there wouldn’t be any there. Instead, I found a nice, privately-owned hotel.

About an hour and a half in, I needed some fuel. So I gassed up, bought some water, and some Carl’s Jr.

I’m going on a cleanse when I’m done this trip. 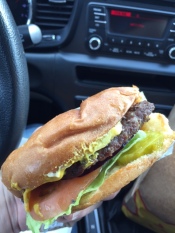 It was tasty though. 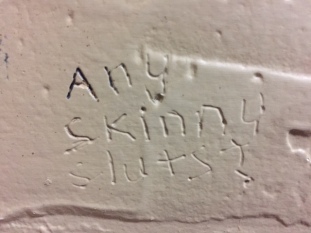 When I was getting water at the grocery store, I felt like I was being watched. Everyone gave me a peculiar look, like I didn’t belong there, or worse– like I was the subject of a reality show akin to The Truman Show. I have discussed this phenomenon before, but hadn’t felt that way in quite some time. I suppose my clothing, demeanor(?) and (eventual) voice, were the giveaways.

After leaving Weatherford, I continued on my long journey through the south. It was with this lengthy amount of time alone, that I truly had my first emotional breakdown. It hit me all at once: I was thousands of miles away from my friends and family, and much like the nomadic way of life, I was without a home; without friends surrounding me.

Of course, they were still there for me via phone or social media (that’ll never change, and I often take advantage of that), but I couldn’t just go see them anymore. I knew this was the right decision for my life, but it doesn’t mean it would hurt any less. It was at that point that I reached the “chimney” that is North Texas. 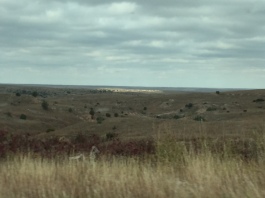 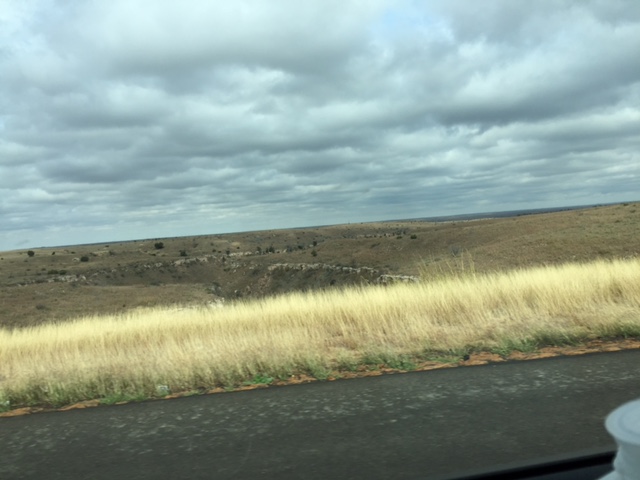 There wasn’t a lot going on, but it was still beautiful. I did notice a lot of wind farms though. 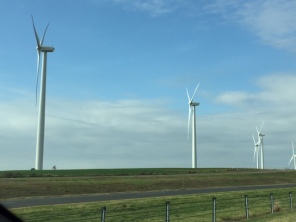 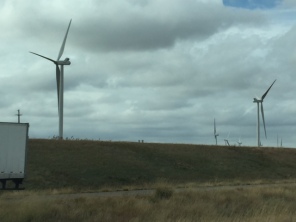 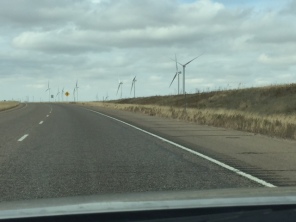 Just in case you were confused with that “other” Britain.

I also saw a lot of flat surfaces, new vegetation, and cows. Lots of cows.

As soon as I entered Texas, however, I came across the first rain I had encountered since Maine. I thought it odd, considering how much of a drought the United States was then experiencing, especially in the south.

After a relatively short time, I entered New Mexico.

Here’s where the rain really picked up.

The rain continued on and off for a few hours, as I approached my next destination. During this time, I was anticipating making a call at Four (Pacific Time) with a prospective roommate in the Los Angeles area. I would stop over at some point to talk with her, as to properly focus on my thoughts.

The whole time zone thing had my mind reeling like a well-written math problem. I kept my clock in the car set to Eastern Time, and was currently in Mountain Time. So, it was two hours behind my family and friends. But as I was staying in Arizona tonight, I realized that would become more tricky as Arizona is the only State NOT to recognize Daylight Savings Time. And wouldn’t you know it? Today was that day. What were the odds?

So I figured that I would be only an hour behind them when I arrived in Arizona.

As I approached Albuquerque, it was time to converse with the potential roommate. I stopped in Los Altos Park. I called her, and we had a great conversation. The wind came through on the call, and I had mentioned I’d been battling the rain all the way over since Texas. I sat in my car for a few minutes, re-plotting the course, as I knew that I needed to get to LA sooner rather than later, and if I went to Upstate Arizona, I may not make it in time based on my usual pace.

I decided to shoot for a bigger city, and Flagstaff (as far as it was), was a good place for which to shoot. I turned the car on, and heard rain, yet again. No, wait, this wasn’t rain. It was… hail!

I couldn’t believe it! I thought for sure my car would be destroyed, so I had to try to find coverage under the trees, even if it didn’t prevent too many pieces from hitting my car.

But I still had a long road ahead. I needed to get to Flagstaff. Every sign reminded me of its distance and I recall the first one saying 325 miles. This was going to be the longest stretch yet.

I didn’t think I could make it. But the surrounding scenery was enough to keep me going. 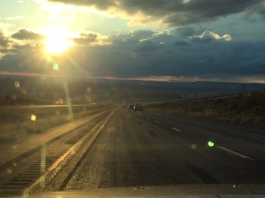 But man, it was a nice stretch of road. 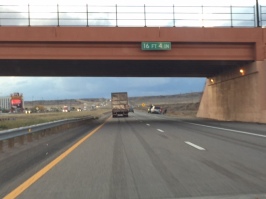 They used the red clay in their bridge design. Some even had markings.

Wow, even blurry this looks cool. 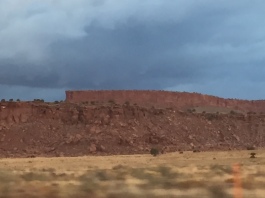 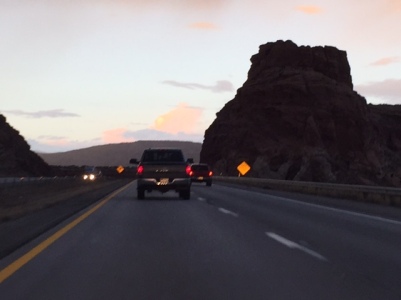 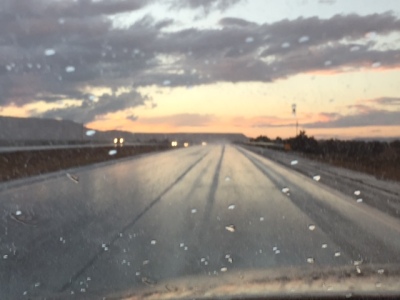 Then, for the first time in a while, I got really hungry, and I was craving Subway. I’m driving along trying to find the nearest one with Google Maps (big mistake). They’re showing 240 miles or so away. I gave up and decided as I soon as I look to the next exit, there was a gas station with one restaurant next to it: Subway. Eat Fresh, bitch.

I marveled at the setting sun over New Mexico. Breathtaking. 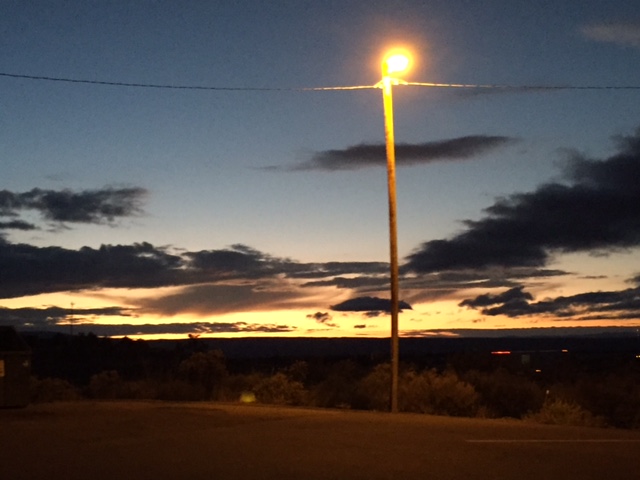 Then I crossed into Arizona.

There were no more photos as it was too dark. I spent my time making calls, losing them due to the spotty reception, and listening to the Mysterious Universe podcast.

Then, as I was on the phone with a friend, I kid you not, I saw something crash near the highway up ahead. It had a blue glow in the front, almost as if we had flying cars and the headlights of a falling car were in front. It could have been the atmosphere burning it up with blue flame, but it was big, meaning it was close by. I wish I could have gotten a photo of that.

After all of this time zone talk, I made it into Flagstaff just like the GPS said, around 9:30 pm. But, it was already ten thirty? Dammit. I didn’t know what was going on. I was getting Pacific time, not the presumed (unchanged) Mountain time.

I checked into the Flagstaff Marriott and asked the lady at the desk. She said that for half of the year, they side with Pacific time, and the other half, Mountain. I was too tired to really go into it, I just wanted to maybe start this entry and go to bed. But then she said that meant the bar was still open for half an hour, so I perked right up.

I dropped my stuff off into the hotel ro– Good God. 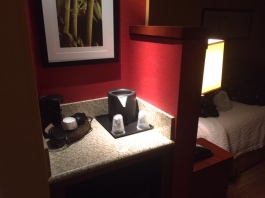 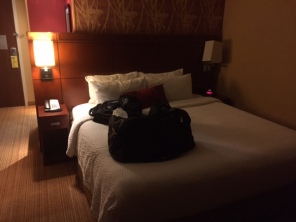 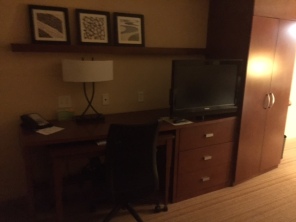 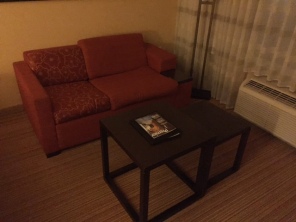 This was the best-looking Marriott yet; classy as fuck.

I brought my computer down to the bar and ordered an IPA. The bartender and I chatted and she happened to be an English major, so we talked shop and discussed Flagstaff, my journey, and writing.

The bar closed at 10 (really?!), and I went to bed. I didn’t really get much writing done that night (more editing the prior days), but I did get the map done (see below)!

Anyway, that was my twelve-hour driving day. Now onto California! I’m only seven hours away!

Stay tuned as I continue my tale of travel across the United States! 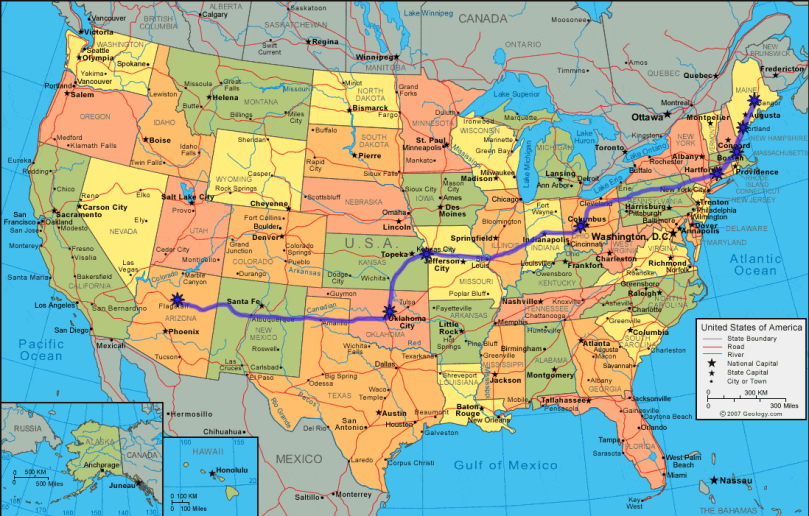