I woke up early today, 6AM, to ensure I had enough time to meet my Aunt and Uncle in Connecticut. We planned on the Lucky Cup Restaurant for breakfast at 9AM. It only took two hours from Boston, but I wanted to make sure that I had some extra time, in order not to rush.

And since I’m not used to sharing all of my life to dozens and dozens of people on social media, I forgot to take a photo with my Uncle Gary and Aunt Marie, and instead enjoyed my meal (now how bout that?).

I soon reached my family’s place and was greeted by the boys, my brother, Kevin, and my two nephews, Kameron and Connor.

He’s about to turn four months old on the first; for comparison’s sake, we met him when he was a fresh one-month-old, and he’s already tripled in size.

We hung around the house for a while, until Kylie got back from Church. I was already crashing hard, so I made a plan to write Day 2, then take a nap.

But not before I got some more time with Conner: 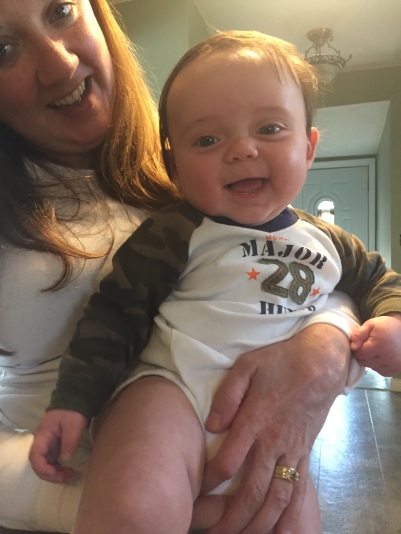 Needless to say, Day 2 took longer than I expected. I didn’t get a nap in, and instead, we went for an early supper, pizza from Domenic’s & Vinnie’s.

The kids went to a birthday party at a local roller rink, so we went to pick them up first. Kevin got lost in the basketball machine and me in skeeball. As soon, as we left, however, the sky opened up, and the rain was coming down hard.

Amidst the mini-storm, we finally arrived at the famed pizza place.

They have some of the best pizza I have ever tasted. If you’re in Connecticut, try them out; there are three locations.

Kam’s version of a photo op.

Madison was singing the radio hits.

After dinner, we went to Bob’s for some clothes and it was here that I felt my energy drain from my body.

Finally, we got home, and it wasn’t long after that I crashed on the couch.

Once I woke up, I ate two apples and some skittles. I was so damned tired that I needed some sugar.

Then got some more time in with Conner as Kylie tested his ability to roll on his back:

And Conner jumps easily. This wasn’t the best one, but the following video does give you a small idea:

Then, after everyone went to bed, instead of writing this, I watched some Agents of S.H.I.E.L.D. and slept until 10:30 am. Whoops.