This week I phoned home and watched a movie that I used to dislike greatly. I’m talking the 1982 family film:

E.T. The Extra-Terrestrial. Yes, you read that right. I used to hate this film even though I am a die-hard sci-fi and alien fan, E.T. just didn’t do it for me as a kid.

I don’t know why I didn’t like that film or the titular little bugger, but heaven help you if you had asked if I wanted to see it again. So, I decided to face the music and watch it again for this series.

And you know what?

It wasn’t half bad. There were a lot of things I used to take issue with, but now, I cannot remember one of them.

Something I didn’t remember was E.T.’s ability to connect with other living creatures and so, my preconceived notions of hatred had me questioning that plot line, like how Eliot could be jumped by E.T’s actions upstairs. There’s no way Eliot could have heard that from the kitchen! Then, I took a step back and let the film wash over my cynical ties.

The screenplay was pretty spectacular in its execution and that thread was a great precursor to the plot device of E.T.’s powers.

The film features some talented people. Steven Spielberg and his casting directors nailed the role of Gertie with Drew Barrymore. They had lightning in a bottle with that little girl.

Henry Thomas was a formidable child actor – that I wish had more of a career – because he too conveyed Eliot to a ‘T.’

One of the most prolific Scream Queens, Dee Wallace Stone, seen her mothering it up right after her turn in The Howling.

And of course, the 80s icon himself, C. Thomas Howell. He, like Corey Feldman, was in every film released in the 80s.

E.T. had an infamous Atari video game that was largely the cause of the video game crash of 1982-83, and it almost had a disturbing sequel as described here by BirthMoviesDeath.

I first watched this at the very same babysitters at which I watched my favorite film of all time: Back to the Future at around I’d say 1994 at the latest.

There was a weird shot that didn’t make sense to me. And the puppet looked a lot better than I had expected. While we watched the original theatrical cut, I did research the CGI amendments to the 20th Anniversary edition. While completely unnecessary, the enhancements weren’t terrible. See this for reference: E.T.’s CGI changes

Clearly little Drew Barrymore. She had all of the best lines… except Eliot’s “Penis-Breath” line. 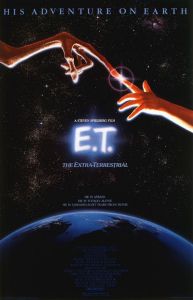 Check out E.T. the Extra-Terrestrial on CanIStream.It?