That’s wrong on so many levels. I’m ashamed of you for making me do that… NO! I watched the 1996 “classic:”

Eraser is a simple story of the mutant freak child from the 1977 David Lynch film, Eraserhead alllll grown up.

No, Schwarzenegger plays an agent for an organiztion that goes one step ahead of Witness Protection and much like the Men in Black, erases people from existence. His latest client is the lovely Vanessa Williams, played by herself Vanessa Williams. She uncovers a dangerous secret about the world of Miss America and gets her title stripped (no pun intended) when nude images of her surface.

No, Lee (her character’s name), uncovers a massive sale of experimental weaponry that her company is selling to the Russians. Arnold must save her from the ones who aim to kill her with said machinery (really neat rail guns). His co-workers in this secret relocation program, (The U.S. Marshals?!), are in on the shady weapon business and frame John “The Eraser” Kruger (Okay, I’m using Arnold’s character’s name now) for the death of another relocated victim.

The man behind the devious plot to “erase” John from existence? Well, it’s none other than Sonny Corleone himself:

The head of the U.S. Marshals knows John Kruger personally and wouldn’t dare imagine him to commit such heinous attrocities. That man is of course played by:

Hmm. And the male CEO whom Lee discovers is in on it, then subsequently kills himself?

Does James Lipton make a cameo?! All right, roll credits…

This film never received the franchise treatment. It was what they call a “one and done.” Actually, the only person that uses that phrase is your douchey roommate who objectifies women. And he sucks.

I first watched Eraser when it came out on home video in late 1996. I encouraged (read: BEGGED) my Dad to buy it at the grocery store. Thankfully, he did, because this was one of our favorite movies to watch together. He would always sit at the edge of the seat of his recliner and get right into the action. When Arnold would dispatch of some low-life, Dad would clap loudly (and slowly; think The Joker clap in The Dark Knight), and shout “Comatose time!” or “Poule la moule!” (sp?) or “Let’s G-O Go!”

So aside from the alligators in the city zoo (terrible, terrible CGI), the film held up surprisingly well… as well as a cheesy 90s action movie can. I will give the alligators this however, they spawned one of the best lines in an action film EVER:

Then James Caan gets a badass cheese villain line: “I want this city wrapped up so tight, it’ll make his balls ache.” DAMN, that’s cheesy, but it conveys the level at which he wants the city on lockdown, so that Arnold will have a difficult time manuevering undetected. See that’s the humor in the jo– Nevermind. 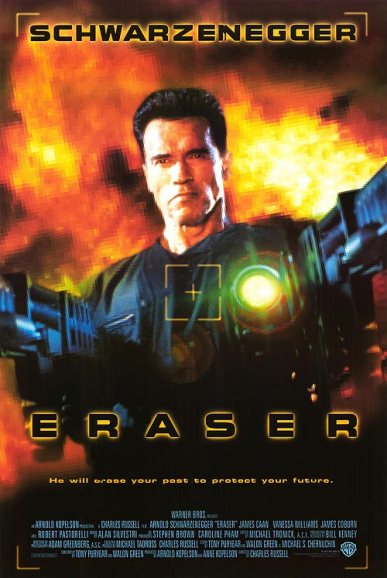 Check out Eraser on CanIStream.It?