Whoa, excellent! I watched two stoners (with bongs just off-screen) as they fell to their deaths, went to hell, then heaven, met up with an alien, and wound up Rock Gods. Yes, I watched that one:

Bill and Ted’s Bogus Journey. As much as I am a fan of time travel, I always liked this film a hair better than the original; not that either one holds cinematic merit, but I liked seeing Heaven and Hell (or at least their interpretation of which).

The sequel had to “one up” the original by including such compelling ideals like mortality and robot “uses” and leaving the time travel to a minimum. They could have easily used the phone booth for time travel round two to prevent something more dramatic (and not for passing a tag team history presentation), but I appreciated their use of a different element.

Bogus Journey has always been deemed the “bad one,” but let’s be honest: they’re both bad in a fun way. As a viewer, you’re able to laugh along with the films, and even sometimes at them, and that’s part of the magic. God, did I just say that Bill & Ted was magical?! YIKES.

Upon revisiting the film nowadays, I’m still just baffled at how they got George Carlin to appear in these films as Rufus!

I’m fairly certain that I had seen this film at my babysitter Gigi’s house around 1993-94.

So this is where the film falls flat. With any mid-tier sci-fi, the technology falls off fast, and the movie feels dated within its generation (in this case, the glorious 90s).

I loved Death… The character (played by William Sadler). In fact, all of the adult characters were more memorable than the duo; between Rufus, Death, Ted’s Dad in the possession scene, and even the military colonel were all thoroughly entertaining.

The film isn’t as funny as I remembered, but then again, it’s hard for me to laugh much at things that I’ve already viewed (especially alone).

Plus, Bill and Ted’s “whoa” schtick does eventually get tired after a while. 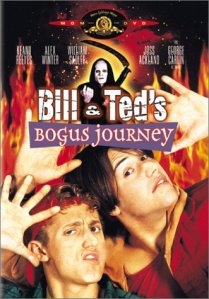 Check out Bill and Ted’s Bogus Journey on CanIStream.It?