For this episode of #52PickUp I watch my favorite Friday the 13th film (yes, you read that right):

Now, I have a penchant for loving cool concepts, even though they’re attempts to reinvigorate waning franchises like Freddy’s Dead: The Final Nightmare, and this film, Jason Goes to Hell: The Final Friday. Hmm, neither one of those were truly final, were they?

I must state first off that I have nothing against the other entries in the Friday the 13th series, I love them all, but this film had that “Je Nais Se Quoi” that allowed it to stand out amongst the rest. I will now attempt to shine a light on my favorite elements of the film.

So why all of the hate on this, the ninth film in the series? That’s because this film delves deep into the “mythos” of Jason Voorhees, and doesn’t focus on killing teens engaging in premarital sex and drug use (although one of the best death scenes comes from just that).

But is that truly a bad thing?

In this entry in the long-running slasher film series, Jason Voorhees has died; blown to bits by an FBI Taskforce. His remains are examined by the attending coroner at a high-security coroner’s office. It is here that things go supernatural, as the heart of Jason rhythmically beats once more, hypnotizing the coroner to eat the heart and become the embodiment of Jason’s evil soul.

Yeah, that sounds crazy, right? But I freaking loved that scene! And the concept! Jason has to jump from body to body, until he can inhabit one from his Voorhees bloodline. It’s similar to the on-screen time of the titular heroes in Iron Man 3 or Batman Begins, as they aren’t afraid to let the story play out. Surprisingly – given the company of those two films – a lot of people don’t like films such as these.

And most people don’t care for lengthy explanations of an iconic character’s history or origin.

But you better believe I did. If it was an original concept. I believe it’s important for long-standing characters and their starring roles to be different, to evolve the idea so that it remains fresh. It’s similar to when Nintendo took Mario in a new direction with Super Mario Sunshine or Super Mario Galaxy. Sure, people hated on the former, but change can be a good thing, even if it only lasts for one installment.

I was only able to check this film out when it was released on home video at our local rental place, Video Market in 1994. They let us rent any Rated R films there.

The film’s concept and accompanying script holds up incredibly well. The story doesn’t rely on tired tropes from older entries in the series, but instead makes the characters aware of their surroundings, and their choices reflect that. Steven could have went with the campers and had a good night with that girl, but he knew better than to chance fate.

I mean, the fact that he’s an adult main character at all is something of a switch in this series as most times we follow a teen protagonist.

The gore effects are some of the best I’ve seen in the Friday series! Holy shit, the kills are over-the-top, and the practical applications of these kills should be shown in a VFX class for their realism and creativity.

Besides the aforementioned practical effects, and the clever concept, I love the depiction of Jason. Kane Hodder will always be the best version of Jason Voorhees, and if there was any reason to hate the lack of Jason Jason, it’s because of his perfect portrayal.

The score too, by the original composer of the infamous “Chi Chi Chi Ha Ha Ha” score, Harry Manfredini, is an intriguing accompaniment to the different scope of this film.

Oh, and a little something I like to point out from time to time– Crossovers! Freddy’s freaking hand grabbed Jason’s mask! It was an early wet dream for a young Jamie as my mind was blown. Now, looking back on that moment as an adult, the reveal was smart, having a dog pull it out of the sand first. The film had a killer opening, and an even bigger ending.

Check out Jason Goes to Hell: The Final Friday on CanIStream.It? 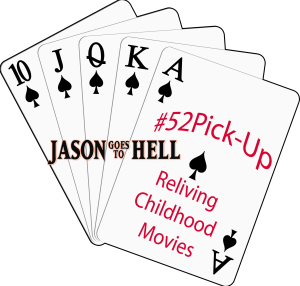