I just came out of the recent Crime/Drama two-hander, written by Taylor Sheridan, and directed by David Mackenzie: 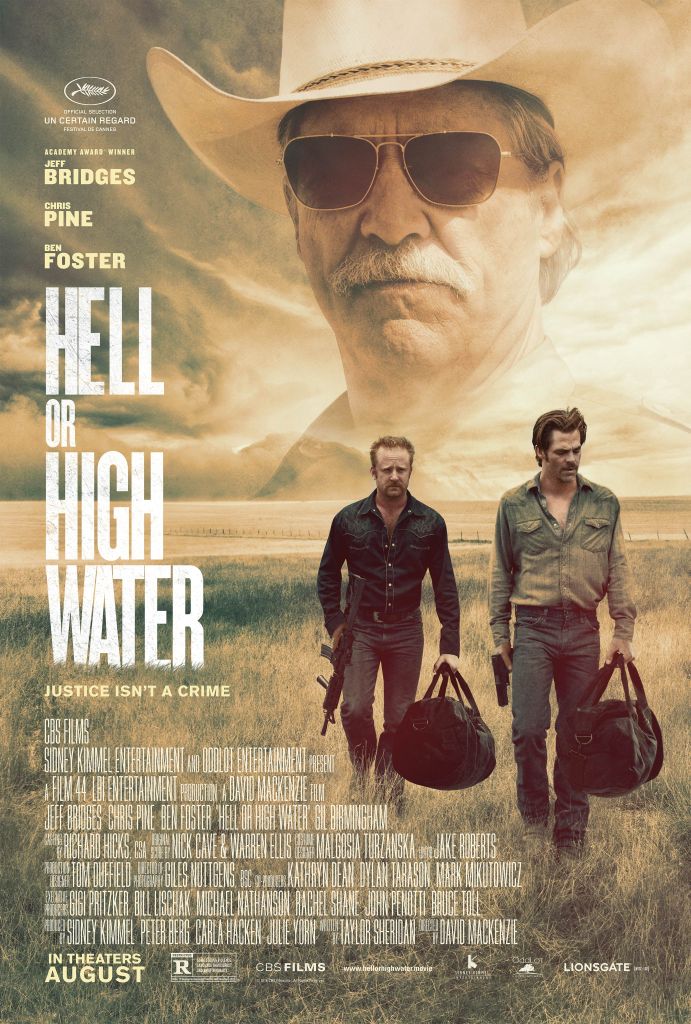 Hell or High Water is a smart and seditious look into the darker side of financial ruin. The Howard brothers, Tanner and Toby (played by Ben Foster and Chris Pine, respectively), are both on the wrong side of the social system: The former recently released from prison, and the latter struggling to keep his family’s ranch from the clutches of their local Texas Midland Bank.

The film opens with the brothers robbing one of the branches of the aforementioned Lone Star State bank chain, where the two leads are revealed to be drastically different (it wouldn’t be a great drama without a lot of character-driven tension).

This heist catches the ear of the Texas Ranger, Marcus Hamilton (played brilliantly by Jeff Bridges) and his partner Alberto Parker (handily performed by Gil Birmingham, stealing as many scenes as he can against the might of Bridges), and the chase begins.

This films really can be seen as either a four-hander, with four powerful leads, or a two-hander of Chris Pine and Jeff Bridges as they attempt to outwit each other in a game of dick-swinging, even if the former isn’t yet aware of the contest.

Taylor Sheridan has crafted an amazingly intelligent script, from the characters’ motivations and methods, down to the sizzling dialogue as this film is one of the funniest and brutally dour movies in some time. The film has elements of social commentary to boot; an intriguing look into the bank’s stronghold on the small towns in which each branch resides.

And finally, director David Mackenzie shapes the film in a style that appears similar in form, until the performances prove the material, and do the script justice.

I would not be surprised if the film is nominated for all of the aforementioned people at once, not just one or two. If this film had any weaker replacements, it would veer into a fun action movie, or cheesy, typical western, but Hell or High Water fires on all cylinders and leaves you at the edge of your seat, elevating its status high above the rest. Do yourselves a favor and watch it as soon as you can.

Hell or High Water was watched at Railroad Square Cinema in Waterville, ME. Support your local theaters and catch this before it’s gone. It’s being held over until Thursday, September 15th, 2016.

Keep up to date with which films may make my Top 10 of 2016 by clicking here.