For this week’s comedy installment of #52PickUp (#14 overall), I appeased my inner fourteen-year old and watched: 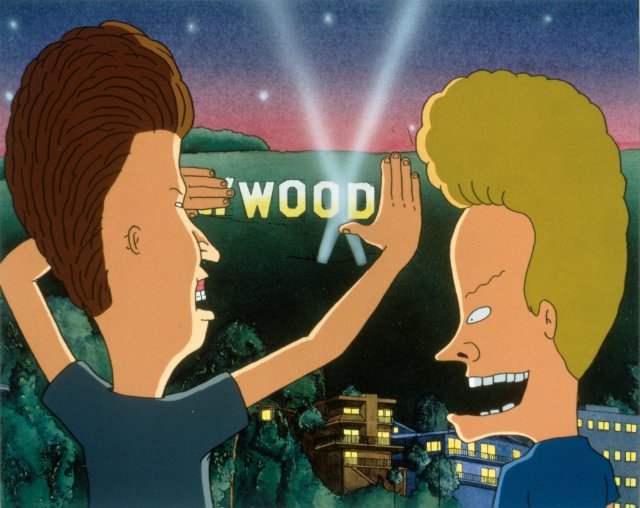 The movie is some sort of miracle to me, as while Beavis and Butthead was a massive hit of a show, the film did cost $12 million dollars and required hand-drawn animation for its entirety. For 1995-96 that was a lot of money for an animated show for adults and definitely not for kids like myself.

Yet, here we are, almost twenty full years later discussing how well it’s held up. But first, let’s discuss the plot.

In Do America, the duo wake up to discover (after quite the mental effort) that their television has been stolen. Now they rarely leave their home unless required (whether for work at Burger World or for school), so the fact they left at all is surprising.

The whole conceit of the original show was that they would watch music videos and shit talk them. Then in between the videos would be their misadventures (my least favorite part).

Thankfully for me, the movie is one long misadventure regarding an X-5 virus contained within a chip that if released, would destroy our country’s populous in under a month. And through their misguided attempts to watch TV and score, Beavis gets the same chip sewn into his pants.

Agents of the ATF department hunt them down at every turn, while the two haphazardly escape every single time without any indication of the real danger they face.

In the end they cause massive havoc, kill dozens, and learn absolutely nothing in the process. You know, like usual. …Well that last part anyway.

I can’t remember if I had seen this in the theaters or not. It was released December 20, 1996 (Merry Christmas), so my year of theater-going renaissance was upon us.

I’m certain that it was on VHS from the Video Market in 1997; ahh glorious VHS.

The movie itself was well-written, but I did find myself a little tired of their repetitive chuckles over the course of the film. It wasn’t how they laughed, but it was the quantity of said laughing.

The voice cast was phenomenal and of course holds up incredibly well. The original duo were once again provided their dulcet (read: grating and immature) tones from the man himself, Mike Judge. In fact, Mike Judge did the majority of the voices from the series as well– Beavis, Butt-head, Principal McVicker, Tom Anderson, and Mr. Van Driessen to name the few crossover characters in the film.

Then the on-again, off-again couple in the film Muddy and Dallas Grimes were played by then husband and wife Bruce Willis and Demi Moore, respectively. They seriously played their roles extremely well, as up until a few years later (when I really started using IMDb), did I learn who played the dangerous couple.

Then there’s the ATF agents: Flemming and Bork. Fleming was easy for me to decipher then because it was Robert. Freaking. Stack. I had watched so many Unsolved Mysteries as a kid with the family, that I could pick out his voice in a crowd of thousands.

Surprisingly enough however, Agent Bork wasn’t something that I knew until after I researched the movie for this blog. Yeah, Agent Bork was an uncredited Greg Kinnear.

“But wait, there’s more!” The old lady (“Sluts”) is the incomparable Cloris Leachman. And Butt-head’s “father” was played by none other than massive fan of the show… David Letterman.

Growing up with a sister six years older than you (and a brother three years younger) allows for a wide berth of pop culture references. Thanks to my sister I began watching music videos on MTV when I was about four or five. Soon after that, I became hooked to MTV waaaay younger than I should have. At least it wasn’t crappy shows like Jersey Shore and Next yet.

I would stay up late and watch The Maxx, Aeon Flux, a favorite of mine- The Head, and naturally Beavis and Butt-head. They were all a part of MTV’s Liquid Televison segment.

Thankfully, I also loved shows like Ren & Stimpy which played in similar ball parks on channels that I should have watched like Nickelodeon.

In the end, the humor of stupid teens doing stupid things spoke to me on the most basic of levels. I never picked up on the social commentary of that day’s youth or the more subtle humor, I just laughed when they laughed. And when they said “weiner.” 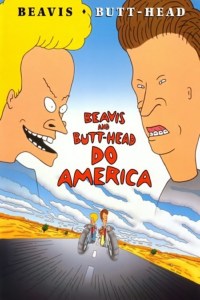 Check out Beavis and Butthead Do America on CanIStream.It?