Chapter 3: The First Day of Chemo

Saturday approached faster than I had expected. The future always seems so far away until it sticks you right in your android chest receptacle, er– Port-a-cath.

They had to hydrate my blood first, so I had been on a steady drip of saline for the past few days. It is true what they say: when they first push the saline through it goes right to your taste buds. It’s disgusting, like gargling seawater laced with a medical “after smell.” At least it was for me.

At that moment I was reminded that I had never been hospitalized before; no pneumonia, bad fever, or any broken legs for that matter–

Well, I did break my wrist once in third grade, but I wasn’t hospitalized. It was a stupid mistake…

One of my most desired superpowers as a kid was the power of flight. Some kids would swing on the school’s metal swingset, gain serious altitude, and launch ten feet in front of the swing onto the grass.

I had to try this. If I could pull it off.. I’d be able to fly, if only for a few seconds. So I too swung until I was nearly level with the metal support beam at the top. It wasn’t easy for me to gain the courage to do it. Every time I’d ride the upswing, I’d hesitate and let gravity pull me back. As the end of recess inched closer, so too did my courage and before you could say “momentum” I jumped… but I jumped too late, on the backswing. Instead of flying forward, I sort of hovered in place and tipped forward until my body was horizontal with the ground.

I slammed face/torso first onto the ground below me. I chipped my front, bottom tooth and broke my wrist in two places. The force of the impact felt as though every bone in my body had shattered for a split second, but it was only the adrenaline and shock mixed with pure gravity. Then the real pain set in. Tears immediately ran down my face. I cried as the bell rang signaling the end of recess. I held onto my wrist like holding a tube of nitroglycerin: delicately. As I returned to my seat, smack dab in the middle of the classroom, I continued to support my broken appendage. At first, the teachers didn’t think I had broken a thing, “kids’ and their overactive imaginations.” Sure enough, when I went to the nurse’s office for the examination, they called my Mom; yup, broken.

I went home and ate some macaroni and cheese as I watched The Price is Right (a usually zen-like experience), but I wasn’t even able to enjoy it. When we went to the doctors, it was confirmed: actually broken in two places. I’d needed a cast. That was the most pain I had ever felt at that point in my life–

–And yet here they were, jabbing a needle into my chest and I winced at the surprise sensation. The pain was okay; because I’d rather have the “chest vessel” attacked than be locked down by an IV or two looking some sort of medical Cenobite.

But the wound was fresh, and the movement of the then loose skin over the port-a-cath’s rubber head is what surprised me. I’d occasionally grasp the nodule with two fingers and find its edges, sliding the port under my skin like a blanket over a hockey puck; moving independently of its cover.

The first bag of chemo was rather large. It had appeared to be at least two sizes bigger than the saline bag– I could be exaggerating a tad, but nevertheless, I marveled at its gigantic shape.

The immediate family came down that Saturday: My father and brother from Fort Kent, my Mom never left my side (she rarely did), and my newlywed sister and brother-in-law came up from Connecticut (the ones in the photo from the first chapter), but with two cool things: 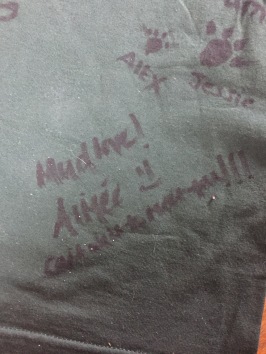 The family cats even chimed in…

Figures they would draw a guitar… 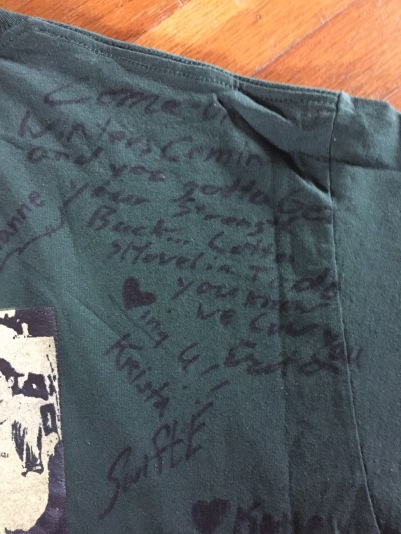 Mitch had a similar disease and had just finished his own treatment. So my sister thought it would be a good idea for him to come talk to me and show that there is an end to all of this. Mitch agreed and he came up with them.

Mitch told me lots of stories of chasing the nurses or at least checking them out. He was a horn dog it seemed, but who was I to judge? I’m right there with ya, Mitch.

It was relieving to see the post-treatment life personified, and the fact that Mitch was healthy was a huge plus. He had an infectious smile, was a delight, and more importantly, was the embodiment of what I had wanted: freedom.

He had to leave sooner than my sister and company, so the family got together and did what we do best: talk. I had been watching a lot of movies lately, so there was one on in the back as we chatted away. During my lunch, the family had decided to go eat out somewhere. I had never asked them how that went considering how somber the atmosphere must have been, but it wasn’t something they would tell me anyway for fear that I would worry. It wasn’t in my best interest to worry about anything else at this point in time.

While they were away, I popped in my copy of The Lord of the Rings: The Two Towers on DVD.

Speaking of eating, chemo had already begun to take its toll. I wasn’t exactly nauseous, but I wasn’t hungry, which is a rare occasion for a “former” fat kid. I really had anticipated being more lethargic than when before I was sick. Surprisingly, it was about the same. I guess I wasn’t really doing so hot prior to admission.

The nurse came in and gave me my medications to combat the impending onslaught. To the life of me, I can’t remember all of the medications that I had received that day. All except for one that is…

As Two Towers came into its second act, my family had returned; arms full of snacks and gifts to keep me happy. During the conversation, I got lost into Two Towers and the other continued to chat around me. Really lost as it were for I felt myself lock eyes with the screen. You know how it is when you can’t break eye contact with something and it takes all of your mental will to break free from the leer? Yeah, it was exactly that, but there was no chance of freedom. The chains of the film wrapped around my pale neck, pulling my eyes ever closer, and I was left helpless, unable to simply turn my head.

At that moment, something at once marvelous and frightening happened… I began to levitate out of my body and float above my head, all while still adrift in Middle Earth. For a brief moment… I felt pure nirvana. It was a true out-of-body experience.

Then it hit me; I remembered the conversation I had shared with the nurse a few days ago when I first arrived on Grant Eight about the drugs I would have administered and more specifically the ones they had to inform the families about in case there were religious beliefs that would oppose them.

The shocking revelation allowed me to finally break my concentration with the television and look at my family.

“I’m high.” Without pause: “That’s right! The nurses said I would be taking Marinol which could make me high!” It was as though I had got caught and had to explain my reasoning for being high. The nurse had come in at around the same time, but for all I knew in my stoned stupor, she had been there the entire time.

Everyone had burst out laughing. I was so embarrassed because up until this point, I had been a total straight edge, never drinking or participating in any drugs in my life. And the last thing I had wanted to be was high in front of my family. But at this small moment in my life, I went from straight edge to “Magic Carpet Ride.”

So I had everyone leave. I wish this was a joke, but I was so embarrassed that I had my family leave so I could sleep this new sensation off. They obliged and went shopping.

An hour or so later I came to, still high as a kite. Everyone was gone and I had now wished that I didn’t dismiss them from the room. However, my pupils were still dilated and an insatiable hunger stirred inside of me. I hit my nurse button. It was finally time to eat.

A nurse had offered to get me some Olive Garden, and since I was from Fort Kent and rarely ventured to Bangor, I had never had it. She was stunned as though I had never taken a breath before and when she talked up the cheese sticks there was nothing that I could do to stop my gurgling stomach acids from roaring “YES!”

Over an hour later when they finally arrived

…They weren’t as good as advertised. I mean firstly, they were cheese triangles, so I was misled; and secondly, there was barely enough cheese in them to classify as a fried cheese product.

Then I remembered something else the doctor had told me about chemo. “It can affect your taste buds.”

Boy, I hope this doesn’t become an issue.

I then opened and perused the included room service menu for supplemental satiation. “Fat boy’s back.”