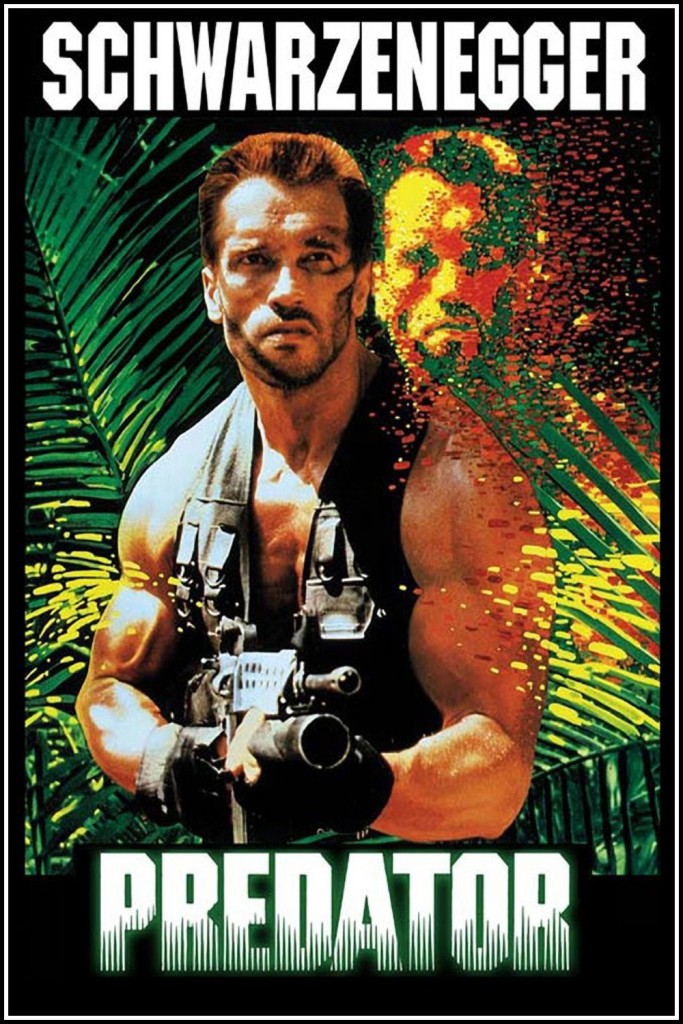 Yup, that’s right. It’s motherfucking Predator. One of the best 80s action films of all time (wait does that make– never mind).

Predator was an action film unlike any other when it was released. It began like a normal one: the typical expendable government team sent to a foreign jungle to take out the bad guys and rescue hostages.

But then it takes a turn for the weird. An alien hunter goes to Earth to kill for sport and for pride. The Predator systematically rips these walking machismo killing machines like ripping through paper towels (and not Brawny, the cheap stuff).

Soon it’s just Ahnuld and the Predator as they face off in the most manly way possible: in the middle of the jungle covered in mud. With Home Alone traps.

In the end, Schwarzenegger comes out on top, living to kill another day.

The film was followed first by Predator 2 (three years later in 1990), which while a very fun film on its own, didn’t live up to the challenge of these expendable mercenaries that the Predator had to face. I mean, Danny Glover and Gary Busey are NOT Arnold Schwarzenegger and Carl (Apollo Creed) Weathers!

Then the third film in the series was kicked around for quite some time. They had wanted to take a different approach on the creature, so they had hired Robert Rodriquez to write a draft. He had this incredible idea that took humans and brought them to the Predators’ homeworld (similar to our jungle terrain) and hunted them there.

When that fell through and all seemed lost for the franchise, Fox decided to make films based off the popular Aliens Vs. Predators comics and thus AVP (2004) and AVP: Requiem (2007) were born. As divisive as they were, I still enjoyed them quite a lot because of my obsession with crossovers.

Then finally, in 2010, Robert Rodriquez was able to make his dream script, simply titled: Predators as a homage to James Cameron’s Aliens.

Oh and there is this amazing fan film that has absolutely no relation to Predator:

Somewhere in the early 90s on either TBS, USA, or TNT. My Dad watched every action movie ever made that appeared on these channels, especially around 3-8 pm Saturday or Sunday or from 8-10 pm on the weekdays. But it was only when he was in front of the TV those days, most times he was busy with his dozens of other tasks.

Naturally, I went on to watch it in its full Rated-R glory somewhere around the year 2000. It was very similar to when I watched the uncut version of Spaceballs, as I hadn’t anticipated the TV edits. When the Predator impaled one guy, then blasted a hole through another guy’s chest, I was pleasantly surprised.

Ok, so we all know how shoddy and dated the infrared Predator vision is because the technology behind infrared now is far more advanced.

But nevertheless, much like many other films in the #52PickUp Series, Predator wins for its predominantly practical effects. Yes, there is the invisibility effect that can seem a bit geriatric, but I still think it looks better than a lot of effects these days for it felt real within the world.

There is a trend of movies that start out with an action scene to grab the audience so their A.D.D. minds can be entertained throughout the entire film. Then there are films that are a slow burn, they take their time and set up the plot and characters in such a great way that the payoff is so much more worth it.

Predator much like the 1986 remake of The Fly, take a balanced approach to the beginning of the film. They both begin immediately with the story leading up to the action, but don’t waste any time, thus engaging the audience. In Predator, they begin with the mercenaries, and in a stroke of genius, show how badass all of them are: chewing tobacco, messing with each other, and slinging the word “fag” around in a derogatory way. In no way do I condone the use of that word in that context, but that was the 80s and as a result they set up the characters to be unstoppable soldiers of fortune with superiority complexes.

This build up of basic character development later proves how formidable the Predator truly is and proves his dominance over them to establish the hunter as one of the best movie villains in cinema.

Check out Predator on CanIStream.It? 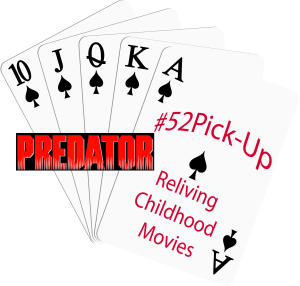