Cat’s in the Cradle

I haven’t felt this sad in quite some time, and honestly… I didn’t think this would bother me so, but yesterday, I’d surrendered a family cat to the Bangor Humane Society. 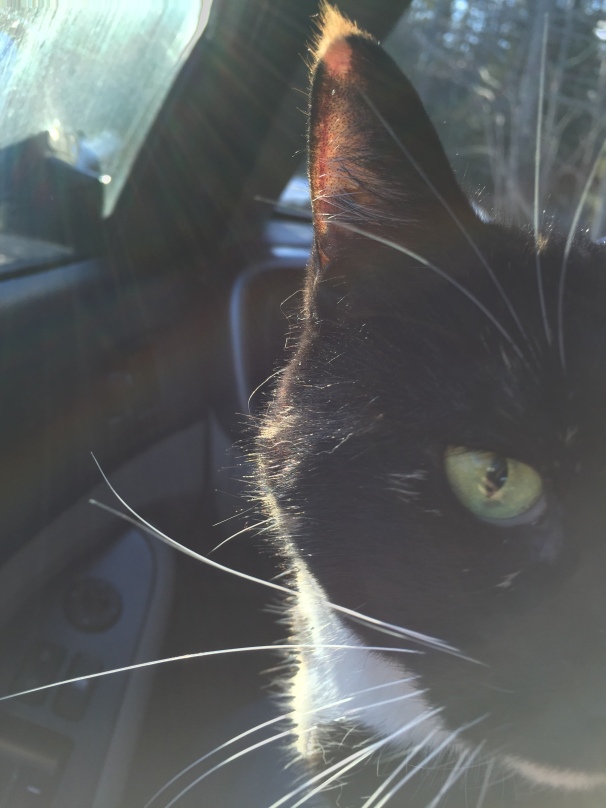 In 2005, my Mom’s cat Missy, and my cat Lucky gave birth like it was a competition- one litter after another. Missy had given birth to a litter of five. She was a jet-black short hair, and the father (of both cats’ litters, that horndog) was a orange and white short hair.

From the same litter were all calico cats. We had decided to keep one, and since her nose was still pink and seemingly no hair was growing around the olfactory sense, we named her Pinky. I wish it was as simple as naming her after the ‘Pinky’ of Pinky and the Brain.

Pinky at just a few months old. Clearly no Pink there.

Pinky was a shy cat. Not much more than most, but she was reserved to her own devices. She never was one to play with others, but more with a laser pointer or a toy mouse.

Soon before her first birthday in May of 2006, Pinky went to stay with a family friend in the neighboring town of Fort Kent. We were moving to Bangor, Maine, three hours south of our town of Wallagrass, and we couldn’t make the move with her. It was here, at that home in Fort Kent, however, that her life changed for the stranger.

The family friend, the man who took care of her, loved her. He was always kind to her, and loved on her for hours on end. However, at some point, she was lost. She ran away or got taken from her home.

The man searched for her, broke the news to us, sullen in his inability to find her. He was heartbroken as he had come to love her deeply. To this day, I still don’t know what had happened.

Weeks later, when all hope was lost, the man gave up. And suddenly after about a full month of her absence, she inexplicably returned. But she had changed; her demeanor was that of a timid cat. Again she was never outgoing, but she was even more apprehensive around other cats and people.

Soon after, she had returned to my Mom’s. She lived with her cat mother and father for a while until my brother took her in.

He too moved down to Bangor not long after that, and Pinky came along for that ride.

Over the years that followed, Pinky, my brother, and I all lived together. She dealt with multiple cats and people, and when I moved in with my girlfriend at the time, Pinky stayed with my brother.

Here is where Pinky’s story changed. Surrounded by lots of male cats, she became intimidated and therefore began to mark her territory on the carpets of each place she had lived.

My girlfriend and I took her in, thinking the other girl cats would break her spell, but it proved fruitless as she continued to pee in random spots around the apartment. The thing we forgot was that there were other cats at that apartment before us.

After my girlfriend became my wife, and we later divorced, Pinky stayed with her. She liked their company and vice versa, so it was fitting. Again, she was an amazing cat, but the peeing was the only caveat from perfection.

So much so, that recently I’d received a call from my ex-wife. Her carpets had been redone (mostly to hardwood floors) and the landlord had seen the large quantities of pee stains beneath it. If my ex didn’t get rid of Pinky, then there was a chance she too could have been evicted.

My ex couldn’t do the dirty work- “It’s too sad.” I assumed it wouldn’t have been that bad. As I drove Pinky over to the shelter, listening to her wailing, it hit me. Not only was this immensely unbearable, but it reminded me of when I was being driven to a foster home.

Even her mouth looks devastated…

The same cries, the terrifying journey to another town, it was all there. Pinky was me twenty-two years ago. And I felt like an asshole because of it.

Giving up this cat was one of the hardest things I had to do. As I signed the papers and discussed Pinky’s history, I kept my finger in the cage. She would rub against it, and lean onto it as though it was a proverbial shoulder. Her wailing continued, but only intermittently, and only when my finger wasn’t in the cage.

It’s amazing how much of the memories with this cat came back to me. I mean I hadn’t lived with her for over two years, but it still broke my heart to give her away.

So my plea to you, dear readers, if you know of someone in the market for a kind and gentle cat, then go to the Bangor Humane Society and take Pinky. She’ll sleep by your side, loves laser pointers, and will never attack anyone. And if you have a place where she can roam and pee freely, then all the better. Again, this is the only issue with her. Otherwise she is perfect. 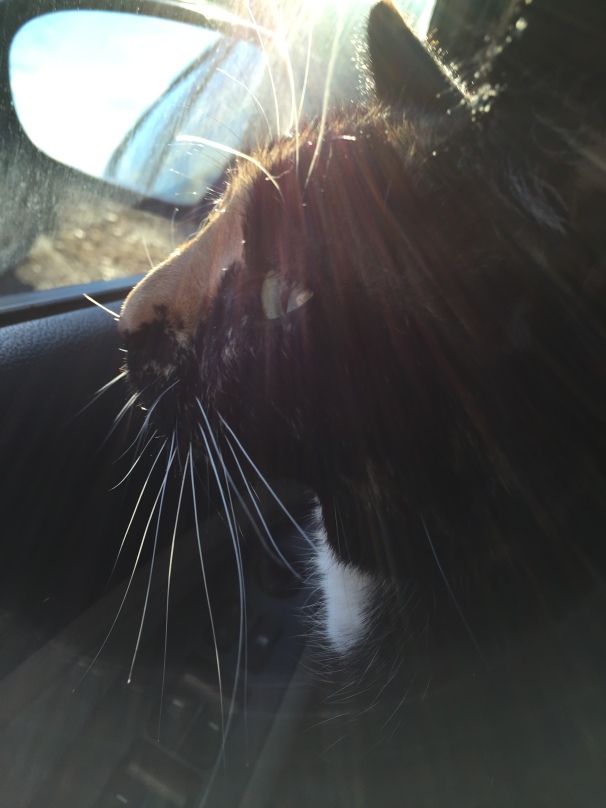 Jamie is a writer whom already misses Pinky. Give her a good home, and share stories of your favorite pets below.