The premise of #52Pick-Up perfectly aligns with the 1992 classic of my youth, Stay Tuned, for this film is an underrated 90s film, but also cheesy as all hell.

Sounds like me as a kid. Hmm, maybe that’s why I liked this movie then?

Well Roy receives a visit from a creepy satellite television salesman who offers him a TV system of a lifetime. All for the low low price of his soul.

He signs the deal, just as his much more successful wife, Helen (Pam Dawber), decides she’s had enough of his “watching” and leaves Roy.

As they argue in the backyard the satellite dish from literal hell sucks them into the channels of counter programming for the devil himself.

I know, I know. It sounds crazy. But this film is loads of fun. 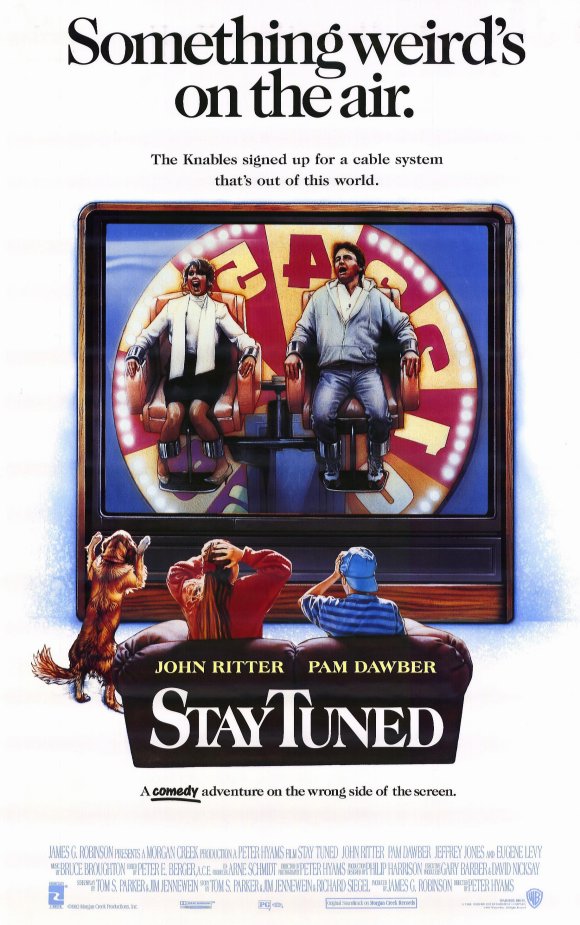 I honestly cannot remember where, it may have been at my babysitter’s house (a place you’ll hear of time and time again), or it could have been just one that we rented at the Video Market.

Stay Tuned has some cheesy effects, and those will always look worse over time, it’s hard not to as some films’ effects these days look outdated the following year.

However, the film is loaded with satire of late 70s, 80s, and early 90s tv shows and commercials; all with a hellish pun.

It’s campy, but not overtly so, and it’s references and effects seem to be the only dated material. The acting is great, because as John Ritter put it in the featurette: “It’s was like we’re shooting a bunch of mini movies.”

The premise is solid, and the channel-to-channel approach makes the film exciting and unpredictable.

This movie is pure meta humor. From its parodies of tv and film, to the channel surfing aspect, Stay Tuned spoke directly to me as a child, and quickly became one of my favorites.

Meta humor is one thing that made me want to make my own movies and tv shows.

The referential gags to other shows and commercials I had seen in the 90s was also a fun hook that got me interested in parody and nods to other works. Technically, this was my first parody film.

Stay Tuned made me want to watch more television. In hindsight, it did the opposite that I wanted it to, but in the end, it’s a film that I hold dearly and one that made me want to do what I do now.

Oh, and John Ritter was underrated as an actor. R.I.P. good sir.

Check out Stay Tuned on CanIStream.It?

What are your thoughts on this film? Have you seen it? Comment below. And Stay Tuned for a new Jamie Classic each week on #52Pick-Up.