No, I was going to prove my life goal duality– love and a career. I didn’t survive Leukemia to settle, and I sure as shit wasn’t going to give up on either one of my passions.

I applied for school again, and The New England School of Communications graciously accepted my reinstatement. I knew the next two to four years would be tough, but I was planning on getting my and Travis’ cartoon show up and running.

We began this release schedule for Facebook on July 1st, 2010. We planned to introduce the world of Fort Thomas as we continued development on the animatic demo. I made a Facebook page for each of the four storefronts in our town’s plaza, one for The Gossip Gab (a publication that chatted about individuals in town), and profiles for eight characters: Tom, Trevor, James, Marley, Martha, Harold, Harry, and John.

I wrote pieces about pit parties that Tom would host, and held real-life contests with our Facebook followers that found the winners written into the party wrap-ups.

My friend Kyle and I repurposed his Dad’s anthem of Northern Maine living for the show’s theme song (with his permission, of course).

Travis and I registered the show’s concept and logo/title with the U.S. Copyright Office for the low, low price of a chunk of our tax returns.

And of course, I kept writing the scripts for the first season. In fact, I had spent almost every night in the computer lab in the library at the hospital doing so. At first, I thought I was crazy, but I had this powerful passion for working, and since I didn’t have my own computer, I would use what tools I had at my disposal.

It was at this time that I fell in love with coffee. My friend Mike had brought me to Coffee Express, and I hadn’t tried coffee since that one time I had Mom’s sugary concoction years prior at a family gathering. On the walk to write at the hospital, I bought a coffee from Coffee Express, and it gave me a mental clarity that I had never felt before. Sure, caffeine wasn’t a stranger to me, but good God did coffee work wonders for my creativity. It became a ritual during my long hours clicking away in the library.

I visited my former night crew after I was done writing, but they always questioned my sanity for being at EMMC when I wasn’t working. I would tell them that it was for a good cause: the Fort Thomas plan of action.

The whole campaign was met with a modicum of fanfare from friends and family. I, honestly, expected just a tad more, but knew that over time, we would gain traction on that front. I knew that shows like The Simpsons and South Park had found their start via small, animated shorts that were celebrated in Hollywood, and thought that this could be our fast track to a pilot. It was with a pilot that we could prove the show’s viability.

During all of this hard work, I felt as though Travis’s excitement was waning. His drawing had decelerated, as he too, got comfortable in his relationship. I began to worry about what he was thinking. Did he feel as though I had taken over? Was his interest fading? Did he even have an interest in making a television show aside from the small talk we shared during those grueling few months in the dish room last year? I think he had no plan of continuing on past the moment of conception. He was content just living life as is.

I simply couldn’t accept that, and Travis and I had the talk. I asked if he wanted to relinquish his part of the show so I could continue full-steam ahead. He got angry when I offered this ‘out,’ and he felt as though I was forcing him off of the project. I told him frankly, “Trav, shit or get off the pot.”

Thankfully, he decided to stay and resumed his work. There was nothing more I had wanted in my life than to make this cartoon show a reality. There simply wasn’t anything else like it on television. A show that seemed based in reality on the surface, but then incorporated heavy sci-fi themes after? This was the show we were BORN to make, and yet, he didn’t seem to care as much. Perhaps he thought it too unrealistic. I knew that we could do this if we put our minds to it. Imagine, a way to financially support Travis and I, while actually loving our jobs for once? Pure bliss. Who wouldn’t want that?

Soon, we put out a call for animators to inject our humble animatic with a little more credibility. We met a man named Russ from Western Maine who kindly gave us a Skype meeting. We told him of the basic premise and shared the artwork for the project. As a working illustrator & animator, he quickly warned us of sharing our unfinished works on a public forum such as Facebook.

I tried to ignore Russ’ advice for this was the plan: to get people’s attention and to get a meeting with someone with some pull. I dismissed the guidance as the thought process of someone who is afraid of his intellectual property being stolen. We already patented it, and it was online, so we had a history of it being our creation.

And to that note, I was doing anything to get people’s attention. On the fictional pharmacy and grocery stores’ respective pages, I even created fake weekly sales. I was hoping that people would think it was an actual store and inquire about its existence and discover our show’s page.

But Russ’ words echoed in my head as the days went on. After over three months of hard work towards this Facebook campaign, I reluctantly pulled the plug. We kept working, but it wasn’t shaping up to what I had wanted it to become.

I still kept hope alive, however, even coercing Travis to use the characters for a Holiday window-painting contest that year at Eastern Maine Medical Center: 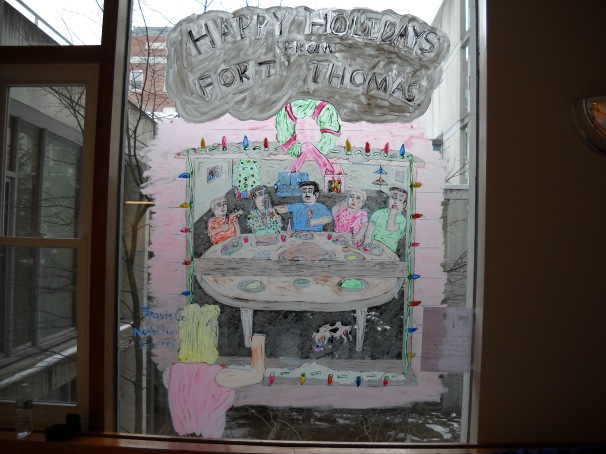 I never lost hope on the show or on Travis. We were going to make this show someday.