Scheduling was a bitch. Every one of us in the dish room staff was tired, fed up, and ready for a sense of normalcy. This renovation had worn itself thin; Day in, day out, we toiled away over this sweatbox, washing two hundred plus sets of dishes and hundreds more cafeteria trays in a machine built for a consumer-sized kitchen. The yearning for a creative outlet had never been so badgering.

And to make matters worse, all of the “input” that was requested by our bosses into the new dish room was ignored, and we began to see the errors in their new installation. Firstly, the machine was exorbitantly enormous and second, their “Three Month” construction phase was – predictably – a gross miscalculation at best and an empty promise at worst. Why was I wasting my time with this job? I initially applied to make more money, and now that I’m paying my bills down, I’m just as broke as I was before. I needed to take a hit to come out on top, and it seemed as though college was, once again, the answer.

I had heard of the New England School of Communication (NESCom) a few times before; however, I had incorrectly assumed that it was exclusively a school for journalism majors. Then I had remembered that Shawn’s ex-girlfriend had mentioned a Video Production Major once during their relationship.

Upon further research, I found the school to be an ideal fit for my needs and began the application process. I was finally going to make my dreams come true. I’m going to make films, dammit.

Around the same time, Travis and I had been talking about the good old days at Dad’s house. When we lived there with Dad, we got away with murder. Seriously, he let us go out into the woods (or anywhere really), for hours on end. Our complete freedom was often paired with mischief, and the stories we collectively reminisced upon had us in stitches, The hilarity was an effective way to keep our minds off of the current predicament in the sweatbox.

Then, Travis showed me this comic strip he had made about watching television with Dad. It was a six-panel about Dad’s secret (not-so-secret) drinking problem in a funny light.

Trav and I talked about how funny this would be as a cartoon show, and then it hit me: it would be fucking hilarious. I wondered aloud what to call this show, but Travis was quick to utter a solution: Fort Thomas. He simply took the name of our hometown, Fort Kent, and changed “Kent” to “Thomas” in honor of one of the main characters. It was a simple fix, and ultimately, had a catchy ring to it.

We began to plot the show’s first season and – most importantly – the pilot. We mined our childhood for comedy and were as lucrative as the panners of the California gold mines of 1849.

Quickly, we formulated the first few episodes and began weaving the yarn of the overall show’s arc. The characters were based on our Dad and ourselves, and we took real-life stories of our wild experiences and made something of which we could be proud. The majority of the stories we came up with happened exactly as we had written or they were based on a real event and altered to heighten the entertainment.

Meanwhile, the real world came back to say hello. The hospital supervisors asked me to be their lead shift supervisor again, but after the insanity of what they put me through, I declined. Plus, I was only used when they were already short-handed, and then MORE people would inevitably call out “sick.” No, I needed all the time I could muster with Travis in this prison cell in order to finally break free.

I bought a digital recorder around this time just so I could keep up with our constant stream of ideas. I simply wasn’t writing fast enough, and this was much easier as it had both of our voices heard rather than my interpretation of them.

The application process for NESCom was going smoothly. I submitted my essay and the deposit, but I froze at the student loan stage. I had been paying on these for years now and was about to spend twelve thousand dollars more a year for an education that I may never get to fully use. Why am I panicked? I couldn’t give you a straight answer even now. Was it the bills? Or the association with the first time I applied for college? Was I afraid I was going to be sick again? I just spent months of my life hating what I had become, and now, at the precipice of rebirth, I stalled. I told the school that I wasn’t ready this year after all, and let this golden opportunity pass. Maybe my apprehension was partly because I expected to bypass the traditional means of hard work and go right to a television show. Oh, what a foolish thing to conjure.

After my post-breakup drink session with Deirdre, her boyfriend, and Matt and Petra, Travis and I began to walk over to the latter couple’s place to hang out. Eventually, Matt decided he had wanted to help us nail the pilot’s script. We were grateful for another writer’s perspective to assist with our script issues.

Matt was also the first person to get me to attempt a salmon steak and the first person that made any seafood that I actually enjoyed. Sure, I tried lobster, tuna, scallops, and many more aquatic creatures, but this salmon was GOOD. Thank God for Matt’s culinary prowess.

In fact, Travis and I learned so much from these two wonderful people about life, love, cooking, and random facts. I thoroughly enjoyed these times. Matt tested our creative voices and gave us our first proper criticism, and that was a welcomed feeling. If I wasn’t planning to learn from NESCom, then I would get some sort of knowledge these next few months.

Travis and I discovered a rare treat after one of our longest and most difficult workweeks: an old edition of the Bangor Daily News from 1939 in one of the old drawers outside of our room. This drawer hadn’t really been accessible for a while because it was essentially painted shut.

I read this newspaper out of sheer curiosity, and it was just before the Nazi invasion of Poland in September. That was a comforting time; America was getting back on its feet, and the forties were looking prosperous, much like my few weeks before my Leukemia diagnosis when the whole world was in front of me. Then Hitler ruined it all. Or in my case, cancer.

The ads in this newspaper were archaic, and everything was cheap, but it wasn’t long before I skipped to the funny pages. The cartoon names were unrecognizable but what’s worse was that the cartoons just weren’t funny. There were no discernable punch lines of which to speak, and that made me think of what legacy I would leave. Would my work (if it ever got produced) hold up or be relegated to some random drawer in the future only to be incoherent? Or was this just a stark reminder that nothing truly stands the test of time?

I needed to work on my own efforts, or I would never even have the privilege to be unearthed by some future human musing on my timelessness. Luckily, Travis and I had stumbled upon a brilliant premise that could lead to a better future for us all. 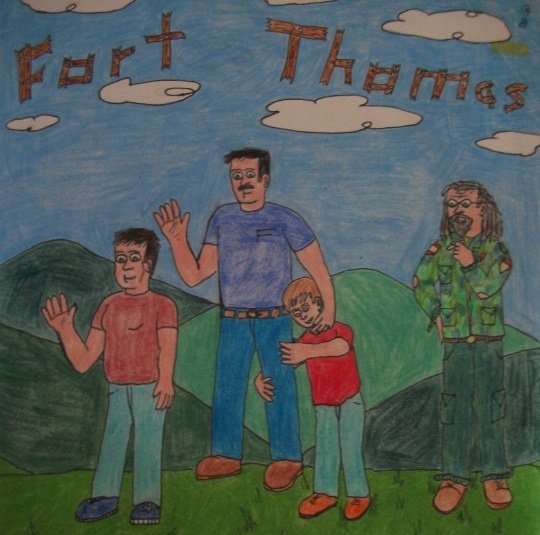