The New Year was here, my fungal infection was officially gone, and I was on the fourth treatment of six. Things were going great, as long as I kept myself preoccupied as much as possible.

TV did the trick for some of the day, as the usual Price is Right, Friends, Wheel/Jeopardy schedule couldn’t be broken, but I had to find creative ways to fill the rest– Aw, who am I kidding?! I had a freaking Gamecube now!

Yes, I was right back into it. I still had some Smash Melee stuff to accomplish (the Adventure Mode for each character and stuff like that), but my new jam was the Christmas gift- Mario Kart: Double Dash. Oo-oh Doctor did I love Double Dash!

The game allowed players to be two characters at once, and there was a huge strategic slant behind this, as each set of characters had their own unique special ability only they could attain on the field in “? boxes.”

Mario and Luigi could shoot massive fireballs, Donkey Kong and Diddy had giant bananas, Toad and Toadette had three mushrooms, etc. I had researched on the internet in the dinky computer room up on Grant 8, lost in message boards for any cheats or tips, but found most people used a single pair! Why wouldn’t you take one from each and get BOTH specials?!

Whichever character was sitting in the back seat decided which special item you received. I used the combo of the Red Koopa Troopa and Toad that way I had three red shells with which to take out opponents, and three mushrooms for a boost; it was the absolute best configuration.

I truly took the time to master drifting as I mentioned before because I had plenty of minutes to burn. And naturally, I’d spend time with my visitors as much as I could (when possible). And when I was alone, or normal TV and game couldn’t cut it, I’d re-watch movies on my very own DVD player. Life was good (as good as it could be battling cancer in a hospital).

But I was getting restless. I couldn’t sleep that well, and my mind was yearning for something more exciting. I kept pulling my Dream Journal out, ready to write down any wild flight of fancy that crept out of my subconscious, but alas, I wasn’t sleeping long enough to dream; and if I did, I’d quickly forget them as soon as I awoke.

The chemo this time around, while not as strong, had begun to show its staying power. A month away made the toxins more impactful, like if you quit coffee for a few days, and suddenly you have an espresso: You’re going to have a bad time.

The fog was thick, but I ended up combating it as best as possible, by not dwelling on what my mind couldn’t process. During my break, I borrowed all three seasons of Futurama from my brother, and now I found myself watching the show again.

The show really didn’t connect with me when it was originally airing, much like Family Guy. I’d watch the shows, but let the jokes pass over me, never really finding them funny. But this time (again much like Family Guy), Futurama resonated with me in a whole new way.

I got into the habit of waking up around 4:30-5:00 every day. Now, if you know me at all, that was quite the feat. I normally couldn’t wake up before ten, and that was even before the months leading up to my diagnosis.

I also became obsessed with a childhood staple: Chocolate milk. The kitchen on Grant 8 was always stocked with 2% and whole, along with Hershey’s Chocolate Syrup, so I was golden.

And since my room, 864, was the closest room to the kitchen, I would wake up every morning, fill my massive EMMC-branded plastic jug, and go back inside my room and watch Futurama until the sun came up. I’d then switch it up to savor the episodes, and would watch a movie instead.

I had also acquired the DVD box set of the Back to the Future trilogy during the Holiday reprieve and watched those, one by one: every successive morning. They had this added feature of trivia tracks that would appear on the bottom of the screen relating to the film, and I wholeheartedly loved trivia.

My history with trivia was a storied one. Ever since we played Trivial Pursuit in the fourth grade and after I fucking nailed the answers to “What does NBC stand for?” and “Who was the creator of Garfield?” (National Broadcasting Corporation and Jim Davis, respectively), I was hooked.

I’d play Jeopardy to the best of my ability; usually, when there was a category I knew, I’d kill it, especially film. I had been watching Wheel of Fortune’s black sheep brother since I was a baby, right along the family favorite, so a lot of random knowledge nestled in nicely between my brain matter.

I loved trivia so much, that I had once joined the Vocational School organization VICA, just to be a participant in their Trivia Team competition (well, also to miss some school, naturally). In one of the first times I had ever been to Bangor, we competed against other teams from around the State at the Bangor Civic Center.

…But we bombed so fucking hard that we didn’t even make it past the first round. It was brutal.

So anytime I could absorb more knowledge, (especially of my favorite film ever), I was game. So I sat back, enjoyed the classic trilogy, along with thoroughly entertaining anecdotes flying by the lower thirds.

Breaking the fourth wall! I miss you, Quiz in My Pants! 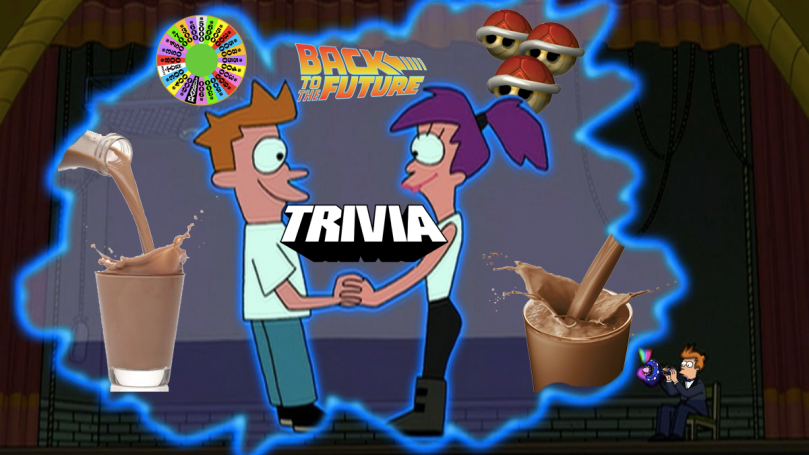