In a bizarre twist of fate, my friend Brandon had a copy of this hard to find horror/comedy from 1999, the Devon Sawa vehicle: 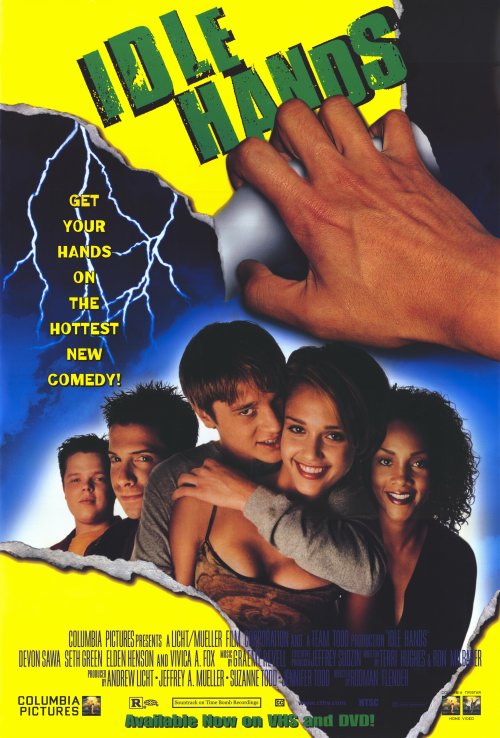 Idle Hands. This film is crucial to my early days of “IMDb brain” development. Around the same time I watched it as a kid, I began to use a website called The Oracle, that enabled users to play the Six Degrees of Separation game most notably tied to famed actor, Kevin Bacon. The website was archaic, and used IMDb as the source of the information.

All you would do is plug two names in the generator, and it would spit out the results in list form, linking the two.

I’d spend hours linking random actors to see if they had a short path to one another. The reason why this memory is linked to Idle Hands is because I would use the lead singer of The Offspring – Dexter Holland – as one of the names in an attempt to stump the algorithm. At the time, he only had one actor credit, this film.

But best of all (and to my astonishment), the site still works and had been maintained by the same guy from a year after its creation, 1999.

The movie itself was one of my favorite films of that Video Market renting era. Yet, as I rewatched it today, I realized that I have only seen it maybe twice ever. So a lot of the plot points and comedy was brand new to me once again.

The film stars Devon Sawa, one of my favorite actors of that time. He was the human form of Casper in the titular film, he was in Now and Then, Wild America, Slackers, and Final Destination.

Idle Hands also starred Jessica Alba in one of her first roles (suck on that, Dark Angel!), and boy oh boy was she smoking. She quickly became another famed movie crush for me.

The plot revolves around full time slacker and stoner, Anton, as he realizes his idle hand has become the literal devil’s playground, and it kills people while he sleeps. His two friends, the hilarious duo of Seth Green (Robot Chicken, Rat Race) and Elden Hensen (Daredevil [TV], The Butterfly Effect), bring the majority of the comedic dynamic to the proceedings, allowing Anton’s panic and gruesome deeds the right amount of balance.

The film therefore is dirty, gory, and extremely funny, solidifying its R rating.

I first watched this movie renting it from the aforementioned Video Market in Fort Kent, ME late in 1999.

Again, I had forgotten a lot of how this film played out, and so it felt fresh upon this reviewing. To that effect, it held up incredibly well, and while some jokes have since been overplayed and cheesy, the majority of the film stands the test of time. The movie is shot in the vein of the standard horror films, and therefore, the shots were super effective.

One thing that does NOT hold up is the late 90s film score by Graeme Revell (Daredevil [2003], Freddy Vs. Jason).

The film balanced the tight rope of comedy and horror quite nicely, and wasn’t afraid to be itself; dick, pot, and dirty jokes included.

The actors were either my favorites then, or ones like Elden Hansen, were ones that I followed closely after.

The wacky and supernatural premise. 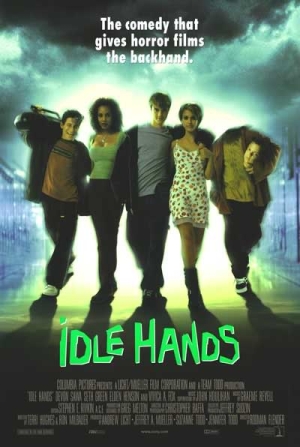 Check out Idle Hands on CanIStream.It? 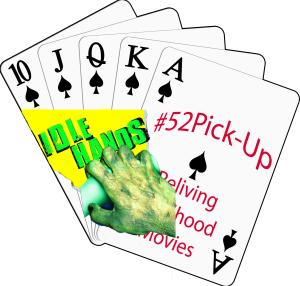