Alright, so let’s get this out of the way now: This movie is my favorite movie of all time. Every time someone has asked me that question, I could never give them a definitive answer, but as I continued to ponder the query, I realized that:

is my favorite movie of all time. The biggest reason is that it truly made me want to make my own movies. It made me fall in love with time travel, my first film score and cemented Christopher Lloyd in my life for years to come. Yeah, that’s right, Doc Brown resonated with me more than Marty.

The more I think about and watch Back to the Future, the more enamored with it I become. The story is perfect (even with its imperfections regarding plot), and the cast and crew culminated in absolute perfection. Sorry, Stoltz.

Back to the Future is in my mind, the best trilogy ever made. I can’t watch the first one without catching the other two shortly after. It’s the perfect trilogy in terms of pacing and plot progression, and this is with my initial apprehension of the third film in the series… I’m not a huge fan of Westerns.

Then there’s the quality score composed by my favorite composer, Alan Silvestri. Yes, of course, he’s my favorite considering his first composition I had heard was this film. But then he also did Predator, Contact, Who Framed Roger Rabbit?, and much much more. While, he’s not as prolific as John Williams, Ennio Morricone, or Hans Zimmer, he is my favorite thanks to his classic work. Check out these beautiful vinyl albums with artwork from Mondo!

This is the film I think of most when I say I watched a slew of films at my babysitter’s. At Gigi’s, I watched dozens of classic 80s and 90s Sci-fi films. Again, this is the reason I wanted to make films one day.

Back to the Future, even with its dated technology, has stood the test of time and holds up probably the best of all of the films that I’ve seen so far in the #52PickUp. Yes, by now you know that I am wholly biased.

Back to the Future extended the Executive Producer Steven Spielberg’s sense of wonder mixed with the sci-fi genre. It made time travel cooler than it had ever been and inspired thousands of others of my generation to enjoy other sci-fi works throughout every known medium.

Back to the Future also boasts a beautiful screenplay. It had iconic characters and raises the stakes immensely at every turn. It would be a boring movie if Doc just waited for Marty to hit the cable above the street to send the car back to the year 1985; no, he needed to have some sort of conflict to make the payoff of Marty actually returning to the “present” a rewarding experience for the audience.

Plus, the DeLorean was a killer-looking vehicle!

Check out Back to the Future on CanIStream.It? 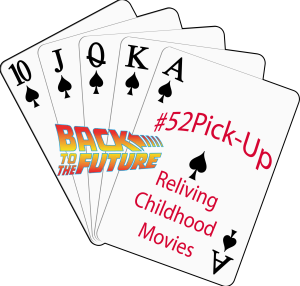