#52Pick-Up will always feature films that are either loved quietly or hated openly.

In fact this film, the 1998 sports parody, BASEketball, is one that is both. Hell, even the two stars, Trey Parker and Matt Stone (creators of South Park) are open about their thoughts on the film.

BASEketball (buy it here) was co-written and directed by spoof master David Zucker. As a kid, I had no idea that this was from the same man who gave us classics like Airplane or The Naked Gun, but I loved it more for its dirty and foul-mouthed humor.

I had seen this before any other of Parker and Stone’s work- South Park, Orgazmo!, and Cannibal! The Musical. So this was my first peek into the minds of the two renowned creators. I wasn’t an idiot, I was aware of South Park, I mean how else was I able to pick up on the Cartman and Mr. Mackey lines. 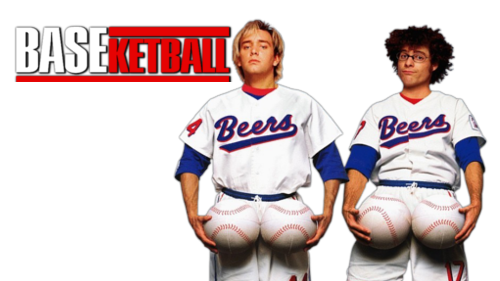 BASEketball follows two perpetual losers Joe Cooper [Parker] and Doug Remer [Stone] who inadvertently create a new sport that becomes an international phenomenon. In this sport, which is a mixture of basketball and baseball, there are no team politics- No trading teams, no multi-million dollar contracts, nothing. The best part? Any schlub can play the game.

The lack of corporate greed is great for the fans and for the players, but not for the team owners who desperately want to make a killing off of the newest sport on the block. And when the financier of the sport dies, it becomes a battle for the rights of the Milwaukee Beers team of which Cooper and Remer are the co-captains.

It sounds like a typical sports movie, and that’s the idea. But like other Zucker Brothers films, it takes the tried and true tropes of the genre and subverts them to disturbing levels.

I’ve always been one who despises the parody films who just throw out names and cameos from people of that year just to catch the viewers attention for the next five seconds and eventually date themselves.

And while it never gets to the Scary Movie 3-5/ Date Movie/Superhero Movie/Meet the Spartans levels, it still has its unfortunate moments.

For example, BASEketball uses jokes about Bill and Chelsea Clinton, the alcoholic and troubled pasts (then presents) of Christian Slater and Robert Downey Jr. (jokes’ on them now), and the nearly old jokes even by 1998 standards of Robert Stack (Unsolved Mysteries) and the Jerry Springer Show.

If it weren’t for these jokes, this film would be timeless. Now, I’m going to sound like a hypocrite now, but it is also because of these jokes that this movie had been cemented into my pubescent years. The jokes were dirty. Every bad word was a gut-buster, but it’s the entangled nostalgia that ties it into my youth.

I believe this was a VHS rental at first. I surely didn’t see it in the theater, because even if it came to my small town of Fort Kent, ME, I was only being able to see movies alone with my friends a few years later.

Thankfully our local Video Market had it, and we watched the shit out of it.

Aside from the aforementioned dated humor, BASEketball holds up incredibly well. If you like sports films (Lord knows I don’t) or if you love some raunchy or foul-mouthed humor, then this will hit your spot.

I also watched the included featurette and it was incredibly refreshing to know that Parker and Stone ad-libbed the shit out of this film, so while they openly “shit” on it, they also put their comedic hearts into the material.

The referential humor, the foul language– Wait, I already answered this, Pig Fucker. “Your Mom’s fucking…. SQUEAK!” Psyche Out!

Check out BASEketball on CanIStream.It?

Have you seen BASEketball? Do you have any favorite quotes? “Steeeeeve Perry!”  “And I should have beeeeen gone!”