It was difficult for me to live so far away from “Tonya.” I had finally found a steady girlfriend and she was three hours away. My mind tinkered with ways in which we could spend more time together. I decided to use some of my time off for Christmas from MBNA so I could go down for more than just the weekend.

Taking time off from MBNA was actually rather easy to do. Since it was an outbound call center, all you had to do was to work the twenty hours that you’re required by front-loading the week with longer days. They would always advise against it, however, because it would affect your “numbers.” But I never cared about that; I sucked at selling credit cards anyway.

The distance also made me wonder what life would be like if I continued on with my plan to go to the University of Maine at Orono (the O.G. UMaine) and finish my schooling down there. It certainly would be nice to get out of town sooner rather than later and I could be closer to Tonya.

In fact, I decided to accelerate my potential move by applying to a local news station, WABI TV 5, the same CBS affiliate that I had fallen in love with during my “tenure” at Eastern Maine Medical Center. The job opening in question was for a news photographer position. I had wondered why they needed a photographer for the news but rightfully assumed later that it was a cameraman (nicknamed Photogs). I cut a video demoing my skills as a cameraman (and as a photographer, just in case) including newsworthy events such as a local fire and of the culvert flooding near our old house in Wallagrass.

I was really proud of my video at the time but had no idea if this was what they were looking for. (*Also: I found out that this is actually older, so I guess I DID want to move earlier) In hindsight, this is a pretty bad video, but for the sake of education, here it is:

When I mentioned my desire to move to Bangor to Tonya, she grew increasingly worried that I was only moving down to be with her. I told her that this was always part of the plan and I detailed how I fell in love with the “city” ever since I was treated there. I thoroughly enjoyed my monthly check-ups too, as I could spend more time in the city that saved me. Plus, if I moved down there, those very same check-ups would be much easier (and cheaper) to attend.

Still, I felt that it wasn’t convincing enough for Tonya and her apprehension only grew. During my Christmas visit, we found out her Aunt didn’t have much longer to live; a month tops. Her lung cancer was getting worse; it had spread to other parts of her body. Her family told her to come visit just in case. I was already with them, so we all rode together to upstate New Hampshire. Here, we visited her at her home. She had a hospice bed in the living room near the couch and the nurse left us so they could visit. She was sick but in good spirits. She even joked about desperately wanting to have another cigarette. It was a happy visit and I was glad to be a part of it. Then her demeanor changed and she spoke of her fear of dying. I could relate; I had the same fear once, but for the most part, it was behind me. She now had to face it every waking moment.

Tonya’s parents went in the room nearby to relax after the long drive, I had the same spot I claimed at Tonya’s house: the couch. This one in particular, however, was going to be awkward, as I would be sleeping near her Aunt. I hope I don’t snore too loudly for her; I tend to do that. Tonya often gave me a hard time about that.

Tonya was set to sleep in her cousins’ room. Her three female cousins were extremely nice and the youngest of which had a baby of her own. This poor baby had a serious bacterial infection that if transmitted to an adult, would develop into a raging, weeklong cold; but to a baby, it was life-threatening.

We young ones played board games and chatted it up in the kitchen. We tried to keep it down for their mother who was in the adjacent living room resting. About a few hours later, one of the daughters went to check on her mother to see if we had been too loud. She was peacefully resting. In fact, her breathing had been rather irregular and raspy before (due to her lung cancer), but now it was quiet. The daughter checked her breath. Nothing. She wailed for us to come in the room. The father (and husband of Tonya’s aunt) ran in too. Rightfully so, the whole family began to cry around their loved one.

The hospice nurse soon came back and checked the body. She surmised that a piece of her deteriorating lung dislodged and blocked her breathing, but she couldn’t be sure. Tonya’s Dad and Uncle shared a few cigarettes, beers, and stories of the one they just lost. I tried to hang out with them more because Tonya and her cousins wept uncontrollably. Tonya didn’t want to comfort her and I respected that. The mood in the room was similar to when my Pepére died and my family gathered to share wondrous memories of the man, but here, there were less happy stories and more sadness. I tried to prod the mourning family to speak of stories to help them cope.

It was hard at first, but soon they too joined in on the cheerful memories. Finally, I felt a little more comfortable in this situation. Just think; I had never met these people and was a recent cancer survivor dealing with a devastated family and a person who lost their battle. I needed some semblance of comfort. That may sound selfish, but I didn’t know them well enough to feel needed there.

It was a funny thing though… It’s like Tonya’s aunt had waited for them to arrive. They were the last relatives that had yet to visit and since she seemed so happy when they were around, it’s almost like she knew her time was up. Earlier, the nurse said to us in private that she had a month or so left, but if we hadn’t seen her two days after Christmas like we did, then they may not have seen her at all. I was glad that they had their time together. I took solace in that and hoped that they did too.

There was only one problem left to address: Where would I sleep? I asked if I could sleep on the floor near the girls, but Tonya’s mother was insistent that I slept separately from her daughter. So, I was forced to sleep on the couch near where this kind woman passed away only a mere two hours ago.

I lied awake on the couch and stared at the ceiling. I tried not to look over to my girlfriend’s aunt’s bed. It was a silly thing to assume, but I didn’t want to see a ghost looking back at me. It didn’t help that the full moon was out and the window near me was illuminated with the reflective properties of the top layer of snow.

The next morning they prepared the body for the funeral. Tonya and her family decided to stay for the service. They asked me if that was okay, but it wasn’t my place to have an opinion; they needed to be there. So, a day trip had turned into a three-day excursion as we awaited the Wednesday wake. Over those few days, I got to know the cousins really well. During a conversation in the very same living room, I marveled at how Tonya could be single. I made physical contact by touching her leg to show that I meant it. I wanted her to know that she was something special and that I was lucky to have her. I didn’t know it then, but that offended her. See, she had cerebral palsy at birth and it caused temporary oxygen deprivation. Therefore, she had been using crutches and a walker to get around since she could walk.

I had never intended to imply that notion and I was never good at sarcasm so maybe it came out that way, but it hurt her and she hid that feeling from me and let it fester internally. I suppose I couldn’t blame her, but this was another step towards our end.

I ended the trip by acquiring the devastating cold from the infant. I was out of commission for a while longer and even through the illness, I could tell something was… off between us. 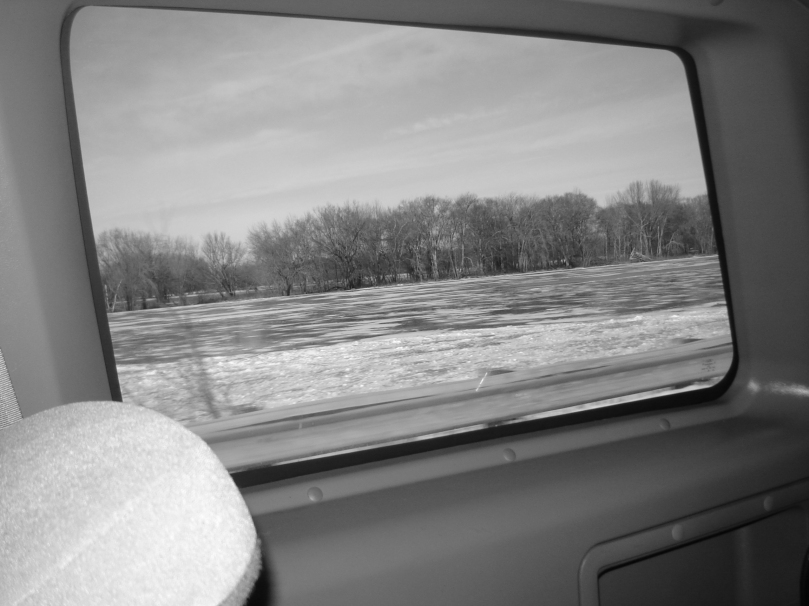