My favorite time of the year was almost upon us: Summer. There was nothing quite like a Maine summer: breezy sunshine, endless things to do, and breathtaking views. I wondered yet again if I would have made it to this point without treatment. Yes, it was a morbid way to envision such a serene two/ two and a half months. But it’s hard not to think of alternate timelines, even with my health fully intact.

And my hair had finally awoken from its chemo-induced slumber. I’ll admit I was a little worried; for a while, the little hair I had left had grown into a spiral, very similar to the cliché spiral pattern that would hypnotize cartoon characters. 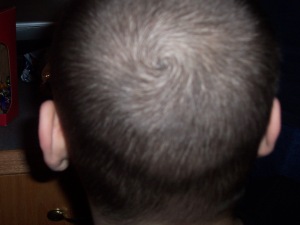 But during the following months, my hair indeed came back, albeit marginally different. My usually brown hair had now become black, slightly curly, and baby smooth. They warned that this would happen, and a part of me always had hoped for a temporary change, but Holy shit, was this going to be the norm?!

I had my brother and cousin Jason stay over at our house often. It was good to keep my friends and family so close by, but especially those two. They were my brothers, and sure, we still occasionally fought, but we were close.

When I was younger – before my parents divorced – Jason and his family (my Aunt, Uncle, and his brother Kevin) would come over for a night of a meal and card games.

Everyone paired off: my parents and my Aunt and Uncle; Travis and Jason (who were the same age), and my sister and my cousin Kevin (who were also the same age). I was the middle child, so it often became a game of “Who Could I Align With Today?” I was six years younger than my older sibling so they would talk MTV and “older kid stuff” like crushes and relationships.

Plus, I was a bratty younger brother. So then I’d play the big brother role to the young-uns and so, we spent the majority of the time together and bonded over the following years. Travis and Jason were forever a part of my posse. Hell, they were the posse.

All was going fairly well. The house was always fun, and work was… work. I had this rejuvenated sense of medical freedom from my recent inaugural check-up. Then I awoke one morning to a crick in my neck. It’s hard to start the day when you slept like a pretzel. I rubbed the pain out but felt something.

The dread hath returned. This bump was tucked neatly under the back of my jawbone and was hard, not like a tumor, more like bone. I immediately panicked and researched the bump online. The very first keywords I entered “What would a tumor feel like?”

Since my May appointment was impending, I decided to mention it then. Dr. McGann was out, so her tag team partner, Dr. Allen, took reigns over my assessment. I mentioned the bump to her, and she couldn’t find it at first. Was I delusional?!

I found it myself and guided her hand to the spot. She immediately assured me that it wasn’t anything to worry about, but my mind continued to reel with fear. Sure, it was small, but if it would grow at all… I would tell them at once.

Distrust formed in my mind. How can I believe a medical professional when they don’t even run a test or give me a possible cause? Just: “It’s nothing to worry about?!”

I continued to research it on my own time and did indeed check its size every day. I had wondered if the old adage of cracking your joints causing inflammation was true. What if I did that to myself by cracking my neck too often?

The questions and potential life-ending illnesses clouded my mental energy. I must develop a system to prevent an overload of these disturbing thoughts, but what could I do? I tried not to dwell on this and instead focused on enjoying the warmer weather and longer days. It would be hard, but over time I could (hope to) let this worry pass.

Plus, it was going to be June soon, my favorite month of the year, and it totally has nothing to do with my birthday.