There’s a saying about boredom: “There is no such thing as boredom, only boring people.”

Having spent years in a small town, designing ways in which to pass the time, I agree wholeheartedly with this statement. To be bored is to be without an idea of something achievable that excites you. Sure, I suppose that real boredom can happen sometimes, but other times it’s a realization that the thing you chose to do wasn’t what you wanted. You do something that you initially thought you desired, like watch a TV show, but then soon after, realize you’re bored with the show.

Maybe that feeling is an internal call to action, to get off the couch and do something different, or maybe it’s guilt for not taking on the other thing in the first place. At any rate, that is indicative of the necessity for change.

But few can understand pure boredom like someone healing in a hospital. Boredom stoops to new, dangerous levels when experiencing medical incarceration. Because at first, one’s simply not that bored, at first I wasn’t. I remember saying that this place was like my very own apartment!

I found myself reminiscing about things I never thought I would long for. Sure I missed the outdoors again – even the snow – but I missed going to a sit-down restaurant, chatting with friends, and people watching. I yearned for the ability to throw a football, and I barely played any sports. The little things clouded my mind with their opportune moments I was unable to experience, ones that no TV show or video game could fill.

I began to revel in new experiences. Instead of letting my nurse go downstairs alone to get me nachos or something else at night, I’d ask to tag along. Sure, I’d have to wear a mask, but I got to see the cafeteria and it brought me back to my elementary school cafeteria.

The lunch ladies at Wallagrass Elementary made some of the best food I had ever tasted ever, let alone in a cafeteria setting. I’m not sure how they took the same ingredients other school had and made magic with them, all I know is that I thoroughly enjoyed lunch every day… My weight proved this fact.

I remember my favorite meal from their repertoire: they made these scrumptious pigs-in-blankets but called it the generic name: hot dogs rolled up in dough. These hot dogs were not just wrapped in stupid crescent roll triangles, but they were encased in soft, chewy dough. Yet, it wasn’t too doughy as you might think. The outside crust was a crisp golden brown, but it still had a give to it. I can still smell them to this day.

The workers at EMMC’s cafeteria had just put on some beef patties on the grill, and they smelled so good, even if they had these disgusting bubbles that formed on them when I would get them upstairs.

I didn’t care that I was getting odd looks from the other patients’ families. Sure, they glared at me like I had escaped, or that they too would get my “infection.” And yes, I was treated more like a leper here in the fucking hospital than when I would visit Fort Kent and go into Paradis Shop N Save or something.

But I didn’t care. I was experiencing something different. It felt great to branch out. Then I’d spend my other moments of the day, reaching out to family members that eluded visitation. For example, I called my sister Kylie a lot. She couldn’t come up to see me as often as she’d like, not only because it was a six-hour trip, but also because she was halfway through her first pregnancy. It was good to talk to her, to get some sort of interaction to get my creative juices flowing again. That was much appreciated.

Yet, I found myself searching for other new experiences. I’d get excited when a new employee came to visit me, covering their co-worker’s normal run. When I would get nightly snacks from the nourishment cart, I would usually get Kathy, but lately, a younger woman named Deirdre had been working a lot of those shifts, so it was nice to talk to her; she had this infectious smile that you couldn’t help but contract.

And still, I’d twiddle my thumbs (usually on a Gamecube controller), waiting for something new to happen. But sadly that’s one of the better downsides of being hospitalized: when you’re not struggling to breathe or are in excruciating pain, you’re still exponentially bored.

I’d watch CNN just to see what breaking news happened so I could be a part of some imaginary conversation regarding some policy issue with another imaginary person who also pretended to give a shit about current events. Then, I’d sit in front of my window in 864 and stare at the snowfall over the frozen Penobscot River. Actually, that was quite nice.

The only thing I could have actually done to help myself get through these dull times would have been to write (AND if I could, I’d go back in time and slap my old self for not doing it!!), but I wasn’t in the mood to write most times. (DAMN YOU! It would be so helpful to me now!)

So when you say that you’re bored, think of what’s missing in your life at that moment, and go for it. If that means spending time with your family; do it, or call them if you’re unable to physically interact. If that means getting some fresh air, then do that; go hiking, or walking in a park. Just go out there and do what you need to do, and don’t complain about being bored, because you truly have no idea what pure boredom is until you’ve spent weeks of your life in isolation. And like I said, even then I could have written, dammit. 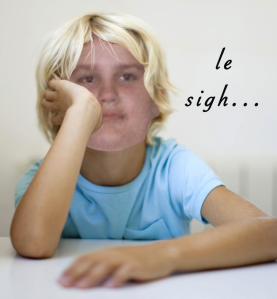