The need for things to keep me preoccupied was ever present and even more so when I would stay at the Ronald McDonald House. This first smaller-dose treatment of the back half of my chemotherapy was boring. I wanted to go out in the town of Bangor and explore, but there were a few problems with that:

But I was burning from the inside, yearning to go out; to shatter the shell of this housing.

Movies, video games, and television weren’t cutting it. We couldn’t even go out to eat anymore. Mom and Gary would order in, or make home-cooked meals – and don’t get me wrong – those were delicious and appreciated, but I ended up wanting a little more social interaction.

Funny to hear myself say such a thing, I had been so quiet up until my junior year of high school. Sure, I would “act a fool (up in here)” with my friends when we were alone, but I never expected to actually want to deal with strangers, yet here I was, entombed in a protective barrier from the tens of thousands of them just outside the walls; still looking for friends.

The news was a staple of the television viewing in the place, much like the game shows of my “apartment” at EMMC. WABI was still the choice I preferred, however, and so I influenced Mom and Gary to view a wholly foreign station and join the TV5 fan club.

Then late one night (January 15th to be precise), the eleven o’clock news delivered an unusual story. A fire had broken out in a building downtown, just over two miles from where we were staying. The Historic Masonic Hall Building had begun to burn from the ground floors.

Firefighters had to evacuate efforts to fight the fire from the inside because the higher floors of the one hundred and thirty-six-year-old building were starting to crumble. They hit an even bigger snag, when the temperatures were so low (-16ºF), that the water they shot at the fire instantly froze on contact and instead of cascading down the bricks of the building, stuck to it like glue, creating a barrier from which the fire inside could thrive.

It got progressively worse at every step: first the four-inch fire hoses froze, then the pumps on the trucks froze; and finally, the fire hydrants themselves froze.

The street beneath the roaring building had inches of solid ice on the pavement from the runoff, and water vapor filled the air like a dense smoke; all while firefighters continued the battle into the night.

It was breathtaking. The imagery of this building covered in ice was a sight to behold. And yet, I was so close to the event, and still only watching it on television. I asked my parents if we could go down there in the morning and witness the fire for ourselves; they hesitated. After I created some explanatory procedures to protect me from the cold, I coerced them into the small trip.

I had a hard time sleeping; like the night of Christmas Eve, I was eagerly anticipating the next day. I awoke early in the morning; it’s funny how one can wake up without any help when they’re excited to do so, and other days (like going to school or work) can be a chore just to even lift my head off of the pillow.

Gary preheated the car like an oven. I bundled up in my winter jacket, hat, jeans, and a mask. As soon as the car was ready, we ran quickly to the vehicle to avoid the chill. We drove the few miles and came out of the downtown area. The water vapor was still shrouding the nearby sky in a haze, but there it was, the building full of flames yearning to be free, but held back by the tomb professionals had created around it.

It was the most exciting thing to happen to me in some time. There’s nothing more devastating yet as beautiful as the violent nature of a loose flame. I’d witnessed fires on the news so many times as a kid, but never had I been able to go to that fire and marvel in its destructive force for myself. It was live and in person, and boy did it not disappoint. 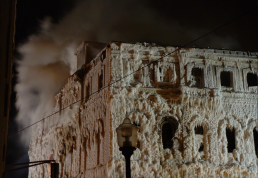 We only drove by it once, and on the only street that we could do so, Main Street. The other street was still wearing its ice blanket, even though graders came by periodically and removed the crust.

Dammit, I forgot my disposable camera! This would have been a keepsake for sure.

We got McDonald’s breakfast (to go) and went to my blood work check-up, then returned to the House of the demented clown. Curse you and your damned food! …but thank you for letting me crash at your pad.

I slept on the couch that night, watching the news updates on the fire over the next day and a half. They had to wait the fire out and eventually stopped adding to its exterior. They blocked off the nearby streets and kept everything else at a distance, then finally ended the battle with the destruction of the building; letting the flame fly free just long enough before it was snuffed out.

I awoke the next day in pain; I slept wrong. I held my back as I looked out the window, hoping to see something else exciting nearby. Maybe I’ll settle in Bangor one day, it seemed like the “happening” place to be.

CREDITS– All photos were taken (except the link to the BDN) by Jeff Kirlin, The Thing of the Moment Photography.